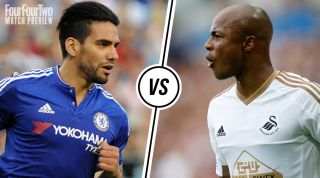 The talking stops, for 90 minutes at least: Jose faces a stern home test in Chelsea’s curtain-raiser.

And so it begins. Jose Mourinho’s summer of sabre-rattling might have temporarily halted following last weekend’s frustrating Community Shield defeat to Arsenal, but The Special One has been effectively scheming during the close season – both on and off the field. There have been upgrades to his squad – Radamel Falcao to replace departing totem Didier Drogba, for example – but can he recover from a difficult season at Manchester United? Alongside that there's been much speculation surrounding future arrivals, which has largely centred around Everton’s imperious centre-half John Stones – much to Roberto Martinez's digust. Surprisingly, the marquee signings of Chelsea’s title rivals haven't yet been matched, but that’s not to say Mourinho’s champions aren’t upgrading effectively.

The manager likes to run from the front during a league campaign, and his early season fixture list is a combination of the good (West Brom away, Palace at home), the bad (Everton away, Arsenal at home) and the ugly (Manchester City away).

Swansea might also fall into the not-so-comfortable category given that last season’s corresponding fixture was initially big on drama: Garry Monk’s team scored through a John Terry own goal (which placed them at the top of the table, albeit for 20 minutes) before losing 4-2 via strikes from Diego Costa (three) and Loic Remy. At the Liberty Stadium, the Swans were thumped by five.

Still, there’s a quiet confidence to Swansea’s summer preparations. Monk had an 2014/15 impressive season (the club’s highest Premier League finish, no less) and seems set to build further. Wilfried Bony has been replaced with Portuguese hitman Eder, while star signing Andre Ayew can deliver menace from the wings or in a second striker role. With effective attacking threats in the shape of Jonjo Shelvey and Gylfi Sigurdsson, Monk has plenty of weaponry at his disposal.

For Swansea, central defender Jordi Amat is recovering from a broken bone in his foot, but could yet be available. Costa is starting this season in a similar manner to the last – he’s still suffering with an unpredictable hamstring that could rule him out of this one. As usual, it'll be touch and go.

Who else? The laser-bright footwork of Belgium’s talented wingman was a pleasure to watch throughout 2014/15. As was his resolute defiance in the face (and studs) of some heavy tackling; Chelsea’s Premier League rivals struggled to stifle his talents. The manager rates him as one of the best in the world. And there’s more to come too, by all accounts.

“He’s getting stronger and stronger,” said Mourinho recently. “Not just in his body, but in his attitude. He’s mentally tough. He’s not the kind of boy who overreacts. After a bad tackle he never rolls and rolls like other players do. He doesn’t try and push referees to make certain decisions. Eden is not this guy. He’s loyal and honest and gets lots of respect from opponents because of that.”

Mourinho has been the central figure in two high-profile “debates” this summer, first with the wife of Real Madrid boss Rafa Benitez, and later with Arsene Wenger. Closer to home, his frustrations rest with star striker Costa. “It's a bit of a concern,” he said. “A player that didn’t finish the season and doesn’t start the season obviously doesn’t make me happy. It was a surprise for me he didn't play on the weekend. I don’t risk my reputation again. Before the last weekend I told you he’s ready to play. He wasn’t. I don’t know. I don’t risk to say yes but I also don’t risk to say no.”

Meanwhile, Monk has made claims that his side had been rocked from the two beatings administered by Chelsea last time around. “It’s the hardest start we could possibly have,” he said.

“Chelsea are a side of such quality that they can walk all over you if you don't compete. The players did brilliantly for me all season and there weren't many times I had to tell them they hadn't been good enough. But that 5-0 defeat was one of the few occasions we simply didn't turn up and got what we deserved. It was a real low point of the season and we don't want to experience that again.”

An improvement in scoreline, but not in points for Swansea. Chelsea to win 2-0.