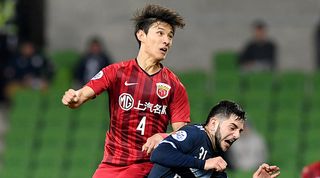 Wang hid the banned jewellery in his sock before immediately putting it on when he came on as a 60th-minute substitute during China's 2-1 friendly win over Myanmar on May 26.

Consequently, he was dropped from China's squad ahead of their 2-0 win in Thailand on June 2.

To make matter worse, the CFA have now said that he cannot represent China for 12 months, while league leaders SIPG have fined him 20,000 yuan (£2,331).

The overriding reason for Wang's seemingly-harsh ban was because he breached the laws of the game set by FIFA and the International Football Associations Board (IFAB).

Under Law 4 in 'player's equipment', the book states: "All items of jewellery (necklaces, rings, bracelets, earrings, leather, rubber bands, etc.) are strictly forbidden and must be removed."

Wang apologised for his actions on the social media network Weibo, saying he promises "better self-discipline and respect for rules in the game" when he returns.

Martin Atkinson is undergoing a 1,700-mile bike ride to the Russia World Cup