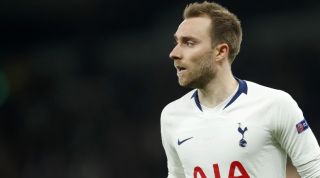 A month away from the new season beginning, Christian Eriksen finds himself in limbo. Determined not to sign a new Tottenham contract, the midfielder made his desire to leave the club public, announcing it through the press during last season’s final international break.

If Eriksen was hoping for a clamour, it hasn’t materialised. Real Madrid may be his preferred destination, but Florentino Perez only has eyes for others. Eden Hazard aside, Perez’s emphasis has shifted towards the younger end of the market and, without the commercial allure to be an exception, Eriksen doesn’t fit those plans. Nor, seemingly, those of any other major side in Europe.

This used to be a more simple situation; players even once had a code for it. In 2019, Eriksen talks of his need for a new challenge, a new situation, whereas 10 years ago he might have been insisting on his need to play Champions League football. Whatever the euphemism, it speaks to the same desire: at this stage of his career – at 27 and within his prime – he wants to be earning more money.

Not unreasonably, either. Tottenham may now be emerging from their austerity era, but their wage structure remains rigid. Even within a local context Eriksen is obviously underpaid, earning a reported £75,000 per week, which is less than nine other members of Mauricio Pochettino’s first team. Given how efficient the Premier League has become at over-rewarding mediocre talent, that’s presumably become an increasingly instructive situation over the years.

Eriksen is at the end of his sixth season in north London. When he arrived in 2013, he came with marks against him. A reputation as one of the brightest playmakers in Europe was already on the wane and he was seen, instead, as a rather peripheral footballer; someone whose influence appeared in short bursts rather than over long, sustained periods.

Pochettino has remedied that problem and evened the ratios. Eriksen retains much of his highlight potential, but he is now a more industrious player, more positionally aware and more attuned to his side’s defensive needs. It’s a change which has occurred parallel to Tottenham’s own growth, of course, meaning that the perception has been of team and player growing towards and then gradually around each other. Now, Spurs and Eriksen are essentially one.

In time, that has bred suspicion as to what one might be without the other. Eriksen is very much the grease in his team’s gears, someone without whom they’re never quite the same.

Simultaneously, however, that dependency has bred a nest of subtle caveats: if he were to be removed from that side, away from the full-back axis which has been designed to accentuate his effect and from the forwards who foresee his passes before he plays them, what would Eriksen be then? It’s a question posed by almost any transfer, but it’s one which seems particularly pertinent in relation to him and Tottenham as a whole.

Perhaps this offers part of an explanation as to how they have been able to keep so many players in spite of their wage structure. Their relative success is not really a story of stars, but rather a testament to how powerful cohesion and team spirit can be. To an extent, taking any one of their players away from White Hart Lane would expose a buying side to the same risk. Signing them is one challenge, ensuring that they aren’t stripped of their intangibles is another.

It leaves Eriksen in this uncommon territory: not wanted by the absolute elite, and forced into a compromise between what he earns and where he plays. Having had to trade his individuality away to reach the heights that he has, he finds himself without the requisite glint to progress any further. If his worth was more obvious, if he was less of a facilitator and more of an outright star, his availability might have piqued the interest of every major club in Europe.

As it is, those sides evidently view his passivity – and his periodic downturns – with distrust. They see him as the kind of player they might buy to complement their real assets, not someone who can attract tens of thousands of fans to an unveiling.

He retains options. Manchester United have had a long-standing interest which dates back several years, but such a move would involve a clear footballing regression. United are yesterday’s power, hamstrung by executive inefficiency and muddled priorities. While they have the capacity to make Eriksen one of the highest-paid players in the game, the proposition on offer would be less than ideal. A Europa League campaign under a manager who most suspect will not last the season? United’s malaise has been sustained enough to be presumed semi-permanent and there’s a reason why the game’s very best no longer knock on their door.

Eriksen’s affliction is the curse of the system player. Really, the cost of rising under the steam of a club who are assumed to be over-achieving. Eriksen is a fine footballer, a balanced personality and a father-in-law’s dream. His time under Pochettino has also shown him to be committed and coachable. At the level of the game he wishes to inhabit, though, those virtues are not nearly as valuable they should be. In fact, the search for what he wants and the size of contract he desires may lead him away from one of the few places where they are still precious.