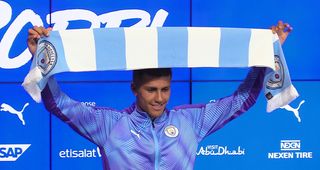 Rodri may sound like he should be plying his trade in the Welsh Alliance League, but the Madrid-born midfielder’s move to Manchester City has made him one of the most expensive Premier League footballers ever.

City have been no stranger to major signings over the past decade, and their willingness to splash the cash has led to the most successful few years in their history.

So we’ve put together a list of the last 50 signings City have made, taking us back to the 2010/11 season, before the Premier League titles started rolling in.

A couple of ground rules before we go on. Each signing must have made at least one Premier League appearance for the club (so no Richard Wright on here, despite spending 19% of his long career at the Etihad) but – curveball – we’ve made an exception for those who have joined this summer, and therefore haven’t had chance to be left on the bench yet.

There’s 10 minutes on the clock – once you’re done, send us a screenshot of your score to @FourFourTwo and challenge a mate to do better.