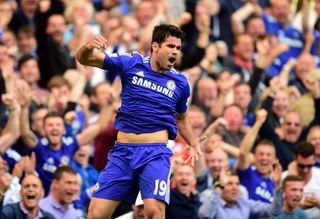 In his first season back at Chelsea, Jose Mourinho knew what he wanted. He didn't quite have the squad he knew he needed (and wasn't slow to remind us of that fact) but he knew exactly what was needed to transform the Blues back into the trophy-chomping juggernaut they were during his first spell in charge.

Mourinho knew what he wanted and he went out and got it. With the help of Roman Abramovich, naturally, Chelsea's summer dealings were quick and decisive. No faffing around, no politicking, no hard bargaining or settling for second best. Just speedy, decisive action. And, on the evidence shown in the opening two weeks of this Premier League season, that assertiveness has already made Chelsea the standout candidate for the title.

Look at the Blues' opening two games and while Branislav Ivanovic has arguably been Chelsea's best player, the new signings have made an immediate and clear positive impact. Cesc Fabregas ran the show at Burnley, helping turn a goal deficit into an exhibition. Diego Costa has filled the void up front almost instantly, scoring important goals in both matches - the equaliser at Turf Moor and the all-important deadlock-buster against a resilient Leicester. And Thibaut Courtois has shown why many believe he's the world's best keeper, making a phenomenal save to deny David Nugent at 0-0.

The ruthlessness of Chelsea's rebuild is what catches the eye. Granted, Courtois is a separate case as Chelsea already owned his rights (though a decision still had to be made to drop Petr Cech, a stalwart and one of the club's most liked players). But in the cases of Fabregas, Costa and Filipe Luis, Chelsea identified where they needed to improve and targeted players at the top end.

While so-called competitors shop for bargains at Lidl or study 'resale values', Chelsea went to Harrods and bought some of Europe's best players. Having a clear market strategy and executing it may not seem worthy of praise, but when you assess the transfer market carnage at other European clubs you realise the good summer Chelsea have had - and how effective it could prove. Sometimes, beauty is found in doing the simple things well.

Whisper it, but heading into the 4-0 deconstruction of QPR, Spurs had won their four previous Premier League home games, scoring 14 goals in the process. In fact, Spurs have won all but two of their league games at White Hart Lane in 2014, and those they didn't win came against Manchester City and Arsenal. That those victories came under the management of you-know-who, however, means we should probably move on swiftly before the very thought of… 'Mr. S' kills any Spurs-supporting FFT readers' Sunday night post-match chi.

To frame the QPR beating as a continuation of development from the Sherwood (d'oh!) era would be wrong. There's a completely different feel at Spurs right now thanks to Mauricio Pochettino, and that positivity and enthusiasm is neatly summed up in the early form of club record signing and forgotten man Erik Lamela.

Lamela set up both goals in Spurs' Europa League win at Limassol in midweek, and the Argentine followed that up with two more assists here. Rather than lock him up in a cupboard and never speak of him again, Pochettino has nurtured the 22-year-old and restored his swagger.

"We are confident that with time and hard work, like he has done in pre-season, he can go far," Pochettino said in midweek. "We need him to look forward, believe in his skill and condition and work very, very hard." Already this approach is reaping benefits, as Spurs made it two wins from two in a rampant performance against an admittedly desperate QPR side.

United mediocrity continues but club a work in progress

Another game, another disappointment for Manchester United. This time it came at the Stadium of Light, where Louis van Gaal's injury hit side took the lead through Juan Mata's tap-in before succumbing to a Jack Rodwell headed equaliser in the first half. The game would end 1-1 - no reason for panic in the grand scheme of things (many teams will go to Sunderland and struggle given the organisation they've shown in their opening two matches) but not a result to convince anyone that an Old Trafford revolution is ongoing.

Van Gaal criticised his team post-match, singling out their slack passing as one of the reasons for dropping two more points. United's passes were 'either too fast or too slow' said the Dutchman, and the visitors' passing never looked like breaking down Sunderland, who were quite comfortable defensively with Wes Brown, John O'Shea and Lee Cattermole particularly solid.

To look at the numbers alone can be deceiving. United completed 141 attacking third passes to Sunderland's 56, while anyone reviewing the match stats might look at Tom Cleverley's game-high 74 passes completed and conclude he ran the midfield. The problem is, stats only tell you so much.

As Van Gaal put it, the speed of the passing and its timing was often the problem. For all United's pass dominance, Sunderland still created twice as many chances, and while Van Gaal's side were fine playing the ball sideways (89% completion) and backwards (97%), their forward passing was less successful (81%). In fact it was uninventive and slow.

United's slack play was also reflected in their foul count, 15 committed to the Black Cats' 10. They were second to everything.

At this early stage of the season it's important to point out that not only are United a work in progress, they also had close to a whole team out injured. The likes of Cleverley, Mata and Darren Fletcher were too slow in possession, but when Ander Herrera is fit and Angel di Maria comes in (if the deal, reportedly imminent, goes through) that speed of movement and play should improve.

Less reason for understanding and calm, however, comes when analysing the performance of Wayne Rooney. United's (and almost certainly England's) new Captain Fantastic was given the armband presumably as he will be expected to lead this brave new Van Gaal era from the forefront, an example to all and the embodiment of The New Manchester United. But once again, this didn't happen.

Rooney is - and perhaps always will be - a curious case. He is at one and the same time both a club icon and the most divisive player in modern United history. By this time next year we could be talking about the club's all-time top scorer (Rooney is 33 goals from eclipsing Sir Bobby Charlton's record). But take a poll of United and indeed England fans, and many would be less reverent, more dismissive.

Again this weekend Rooney disappointed. He failed to lead from the front. He failed to register a single shot on target. He failed to create a single chance. His passing was timid and he looks to have lost at least a yard of pace. Gone (or at least temporarily missing) is that explosive burst of speed that takes him past a player in one-v-one situations, the aggressive running that has defined him since he burst onto the scene at Euro 2004.

Both he and Robin van Persie lacked service, sure. But there's a deeper issue at hand with Rooney. Do we ask too much of Wayne? Or is he a player in decline? David Moyes didn't think so, handing him a £300,000 per week contract. Nor does Van Gaal, making him captain. And yet… something doesn't seem quite right.

Perhaps we expect too much from Rooney, but given his performance at the Stadium of Light (and in countless games last season, particularly the big games) you couldn't honestly conclude this is a player at the top of his game, where a leader should be.

Asked to name the biggest positive for Sunderland after the game, Gus Poyet didn't hesitate. "Will Buckley" he snapped, barely giving the interviewer time to finish his question such was the Uruguayan's enthusiasm.

Signed from Brighton for £2.5 million, Buckley didn't start Sunderland's opening game against West Brom but came into the team here after injury to Adam Johnson. Deployed on the right hand side of the Black Cats' forward trio, Buckley's main asset was his dribbling ability, his intricate skills taking him past Ashley Young on several occasions, drawing fouls and winning set-pieces in dangerous areas down the right.

The Oldham-born winger wasn't always involved, dipping in and out of the game at intervals, but created more chances than any player not named Seb Larsson and beat his man more than anyone else too. Poyet was right to be optimistic about the 24-year-old, while Johnson - who didn't really impress at West Brom - may face a battle to regain his place.