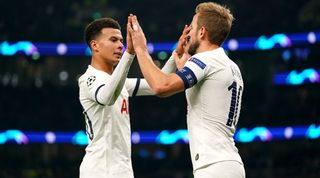 Dele Alli is in the hinterland between good and bad form at the moment. He’s treading through the snow slowly, rebuilding his self-belief one touch at a time. As his two recent performances have shown – against Watford and Red Star Belgrade – his technique remains in recovery and his influence is still tenuous, as he continues to show only hints of his ability.

In a way, though, that’s always been the case. His tendency is to play in short bursts, even if the pause between pulses isn't usually quite this long. The classic example is the famous goal he scored against Crystal Palace at Selhurst Park. Those who were there will remember an anonymous Alli performance that day and the game’s signature, balletic moment arriving from absolutely nowhere. That context has now been lost, but part of what framed that goal was just how out of place it was with what had come before.

But that’s who he is. He’s a player who operates outside a team’s collective rhythm. He’s not quite decoration – not a luxury player – but then neither is he really part of the Tottenham heartbeat either. What determines whether he’s being effective is not the regularity of his contribution, but its quality. He's always been like that - ethereal, the kind of player whose ability is described in moments rather than entire games.

It’s strange, therefore, to argue that one of the problems for Alli has been a lack of continuity. If his habit is to drop in and out of games, ad-libbing his influence, then why should his starting position within a formation or the nature of his use matter?

It has done, though. The more stretched that Tottenham’s resources have become over these past few years, during the descent to where they now find themselves, the more his form has suffered. He’s been moved up and back, between the forward line and the midfield, never quite finding a role which suits him and never quite replicating his early career chemistry with Harry Kane or Christian Eriksen. He's been starved of those combinations and he's suffered.

Add in issues with injury and the apparently obstructive nature of his private life – which his representatives are busy addressing – and there’s at least a partial answer for how Alli arrived in this situation in the first place.

How Tottenham got to where they are is a different story, with several different diagnoses. Their recovery involves more than one factor, too, but Alli is certainly among those remedies. Again, that seems like a contradiction: he’s peripheral in a way that other players (Kane, Son, Ndombele, Vertonghen) aren't, and his role doesn’t carry the structural implications of a full-back or an orthodox central midfielder.

But then that’s exactly why he's important. Alli has always possessed the ability to operate independently of the collective mood. In addition to many of his goals coming in matches during which he, individually, was less than prominent, he has - or had - the habit of making telling contributions at opportune moments.

The most memorable, of course, was in that Champions League semi-final second-leg withAjax, when he created not just Lucas Moura’s hat-trick goal with that clever, round-the-corner nudge, but also his first – the goal which began the comeback. Across that tie, he was arguably Tottenham’s most disappointing player in many ways, looking restricted by the cast on his wrist, but he was still decisive when it mattered.

And that’s a long-term trend. He has scored a lot of goals against a lot of very good teams, and he’s produced game-changing moments when Spurs have desperately needed them. At Stamford Bridge in 2018. At the Etihad the year before. The first goal in the 1, 2, 3 against Manchester United the season before that. There are very few Tottenham players in the modern era who can claim to have scored home and away against Manchester City, Chelsea and Arsenal. Alli can and that’s indicative of a very specific sort of usefulness – one which is very precious at the moment.

If Pochettino and Spurs do stay together, they will remain imperfect for a while. The team quite obviously needs to be rebuilt and that’s a process which will involve time, money, and trial and error. Key to maintaining some semblance of group morale during that period, therefore, will be extracting a contribution from a player who doesn’t depend on his surroundings and who isn’t reliant on optimal conditions to perform.

Alli's slight separation, that tactical subtlety he possesses, can be of great comfort to this suffering side.

QUIZ Can you name the 51 all-time top scorers in the Champions League?