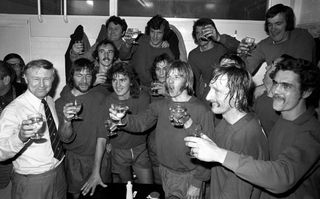 As a non-league side, you can expect the odd cup battering on first round day – but a merciless Preston North End took it one step further in October 1887. The club’s 26-0 defeat of Hyde remains a record for a competitive match in English football – a defeat so comprehensive that it was still causing confusion over 70 years later.

“Twelve goals were scored in the first half and 16 in the second half,” wrote the North Cheshire Herald as they looked back on the thrashing to end all thumping’s back in 1958. Even FFT’s limited grasp of arithmetic can work out that they’ve heaped a couple of goals onto Hyde’s misery, although to be fair, those who were at Deepdale on the day probably had similar issues keeping count.

A busy afternoon in east London

It’s safe to assume that the streets of Leytonstone would have been empty on a cold, dank November afternoon in 1952. By unbelievable coincidence, Leyton, Leytonstone and Leyton Orient were all drawn at home against Hereford United, Bristol Rovers and Watford respectively. With no floodlights, no TV and precious little scheduling imagination from the suits at Lancaster Gate, all three matches kicked off at 2.15 on Saturday afternoon, leaving this particular pocket of east London resembling a ghost town. So what was the afterparty like? Pretty crap, by all accounts. By the time the balls were being juggled for the second round draw, all three sides were out.

“I was disappointed as I thought I should have got 11,” Ted MacDougall told the BBC, 40 years after he had put poor Margate to the sword with nine goals for Bournemouth in an 11-0 first round victory in November 1971. Those goals did more than simply put the Cherries into round two – they changed MacDougall’s life. Just five days later he was lining up alongside Eusebio and Jimmy Greaves as part of an all-star world XI at Upton Park for Geoff Hurst’s testimonial, and the following season he would be featuring with the likes of George Best and Bobby Charlton for Manchester United – the very definition of FA Cup magic.

By late November 1974, Bideford fans could have been forgiven for being sick of the world’s greatest cup competition. It had taken the men from Devon 12 matches just to get to the first round after a marathon campaign that meant they barely had time for a league match, let alone a pint in the local after a full day’s work. After making it over the first hurdle at the first time of asking, and then the second, it took five matches for them to get through the third round of qualifying, and then four more to take the final step into the FA’s first round pot. So what happened when they finally made it, out of breath, sweating and cursing the non-invention of the penalty shootout? Well, they lost, of course; a 2-0 defeat by Bristol Rovers putting a not-so-premature end to their FA Cup adventure. Still, at least they did it at the first time of asking – another replay would have been more than most Robins’ fans could stomach.

No early Bath for students

Most of us headed for university for two things – both of which FFT will leave to your imagination – but 11 lucky Bath students in November 2002 were handed the chance of a lifetime when they became the first university team since Oxford University way back in 1879 to appear in cup football’s greatest domestic competition. Cheered on by a crowd of over 5,000, the learned folk of Somerset were 4-0 down to Mansfield at half-time before pulling two goals back to earn respectability. The main talking point wasn’t the players on the pitch, though, it was the bloke in the dugout. Ivor Powell had been part of the Bath coaching setup for the past 32 years and had been the best man at Stanley Matthew’s wedding. By the time Mansfield came to town he was 87.

You may have to pay through the nose to watch football these days – but at least you can go home and have a slice of toast in a lit room. That's more than you could do in the winter of 1973. The Yom Kippur War had left the country’s power supply in a sorrier state than Boris Johnson’s barnet, and meant that all FA Cup replays had to kick-off at 1.45 – regardless of the day they were being held. “The Football Association will reduce the risk of having this week’s FA Cup replays abandoned for bad light by ordering clubs to kick off 'no later than 1.45',” reported The Times. "Most clubs had planned to kick off at 2pm but if any games had to go into extra-time the light would probably make a finish difficult.” Shrewsbury, though, were ahead of the game, hiring a generator for their first round tussle again against Wrexham. They probably wished they hadn’t bothered after losing 1-0.

Brian Clough had only just arrived on the south coast when Walton and Hersham hopped on their FA Cup fun bus and made their way to the Goldstone Ground for a first round replay against Brighton in November 1973. Having won the league with Derby just 18 months before, Clough was probably pondering where it had all gone wrong before the game. By the time the ref had blown for full-time he could have been forgiven for packing it in completely. The visitors, who included Dave Bassett in their starting line-up, won the match 4-0 thanks to a goal from a PE Teacher and a hat-trick from a factory engineer. Only the butcher, baker and candlestick maker were missing. Imagine the damage they could have caused.

It looked like a fairly innocuous FA Cup first round tie when non-league Guisborough Town were drawn against Bury in November 1988, and for the opening 36 minutes it was just that. Then referee Tom Fitzharris booked Guisborough’s Ray Hankin for not wearing his captain’s armband. The reason? Well, he didn’t have one in the first place. Instead he wore a sweatband donated to him by a team-mate but had hurled it off shortly before his yellow card as it was too tight. Furious with his booking, Hankin launched a verbal tirade at the ref of such ferocity that he was sent off. “The referee can insist that players are properly dressed, but there’s nothing in FA rule about wearing armbands,” fumed club secretary Keith Smeltzer.

Gretna tie the knot for the final time

Glasgow was rocking in May 2006 as plucky Gretna took on Hearts in front of over 50,000 fans at Hampden Park. The club’s wee little Raydale Park ground had been a great deal quieter 15 years previously when the club took on Rochdale in the first round of the FA Cup. The programme billed the match as a clash between Scotland and England, but if this was cross-border rivalry it was small beer – more Boddingtons than Bannockburn. The match finished in an underwhelming 0-0 draw. Dale won the replay 3-1. Gretna packed their bags.

Replays are now almost a relic of a bygone era – but for 16 days in November 1971, both Alvechurch and Oxford City probably wished they had never heard the word. The pair were at a stalemate in a tie which took 11 hours to settle. Not even four bouts of extra-time could separate them in an FA Cup odyssey that took in replays at grounds they could never hope to fill – St Andrew's, Villa Park and the Manor Ground. In the end Alvechurch won 1-0 to proudly put their ball in the first round pot. Just two days after their final replay they met Aldershot at the Recreation Ground. And lost 4-2.