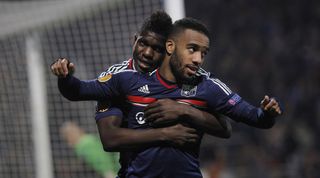 Lyon’s Alexandre Lacazette has represented France at every level, and is now set to integrate into Didier Deschamps' senior squad ahead of Euro 2016 (to be hosted by Les Bleus).

The 23-year-old striker was linked with several English Premier League clubs early this summer, namely Liverpool and Newcastle. But the local boy, who began his career with Les Gones aged 13, quelled the rumours by signing a three-year contract extension.

Lacazette was at his best last season for the French side, netting 22 goals in 54 appearances in all competitions. His arrival in the Premier League might not have materialised this year, but if current performance levels remain high it could happen sooner than later; Arsene Wenger is a reported admirer too.

Although Lacazette still remains in France for the 2014/15 season, a step up to a bigger stage seems inevitable if he is to grow and show his skills at an elite level: the Champions League.

His promising future at club level is matched internationally with France, for whom he made his debut last summer in a friendly against Uruguay. With no competititve qualifying matches for Euro 2016 necessary, he is expected to find more opportunities soon enough under Deschamps. First up are Spain on September 3.

Lacazette is a young forward with a proven eye for goal. He has already scored in Lyon's first two Ligue 1 games of the season, with his ability to both finish and win free-kicks in dangerous areas crucial for his side.

By being able to switch to high speeds when his opponent intercepts the ball, combined with the strong tackler he is, Lacazette has scored more than one goal by pressing and winning the ball in the opposition half. And as the video below shows, he can dribble a bit too...

He has to calm down. Last term he managed to reach double digits for cards, including eight yellows and two reds – both within four matches. At 5ft 9in the striker is hardly a threat in aerial duels, but playing alongside someone like Arsenal's Olivier Giroud would almost certainly compensate. With his searing pace and Giroud's fine hold-up play, the duo have the attributes to form a potent attack in the future.

Lacazette is highly ambitious to succeed at the very top. Before the season, he declared: “I can’t think that I will score more goals than Zlatan Ibrahimovic, but I want to try to reduce the gap. One day I hope to be a great striker like him.” Not a bad role model.

Lacazette scored an 85th-minute winner against Spain in the 2010 UEFA European Under-19 Championship final. France won 2-1 to claim their first U19 title since 2005, with a team featuring the likes of Gael Kakuta (Chelsea), Francis Coquelin and Gilles Sunu (both Arsenal).

Lacazette will aim to score more goals than PSG’s Edinson Cavani, after finishing only one behind the Uruguayan with 15 last term. Meanwhile, the striker has his sights on pushing Lyon as far as he can in the Europa League (should they overturn a 2-1 first leg defeat against Romanian side Astra) – don’t forget the winner of the tournament qualifies for the Champions League this season.

Not moving to the Premier League was Lacazette's choice. And by continuing this form, he'll have plenty more in the near future – no doubt those Premier League clubs will return for his services.