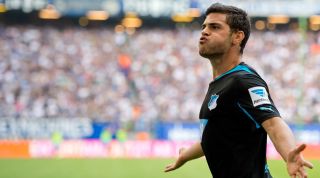 After being loaned back to the 2.Bundesliga side until the end of the 2011/12 season, the young attacker made a top-flight debut for his new club against Borussia Mönchengladbach in August 2012. Volland went on to score six goals that season as Hoffenheim narrowly secured their Bundesliga status by beating Kaiserslautern in the relegation play-off.

Volland has already nearly matched last season's tally for the free-scoring Sinsheim side, while his versatility and goal-every-other-game strike rate with Germany's U21s means he could soon fit into Joachim Löw’s dynamic senior national side.

An intricate, agile and versatile forward, Volland can play out on the wings or through the middle. From wide positions he uses his pace and technique allow to cut inside and open up space, while as a forward he can drop deeper into the No.10 role, using his impressive vision to create goalscoring chances for team-mates. This season he's added a peerless edge to his finishing with trademark centre-forward play, making him one dangerous opponent.

At 5ft 10in, Volland is no physical machine. So leading the line and holding up the ball is not in his attacking repertoire, which means he needs a more robust striker to link up with. When playing out wide Volland prefers to cut inside, rather than provide the cross a natural winger may elect for. He'll need to improve this element of his game to avoid becoming too one-dimensional and easy to defend against.

Hoffenheim, well aware of Volland's potential and current ability, extended his contract until 2017 this summer. It'll increase a transfer fee for potential suitors, but the skill and ability on offer makes Volland worthy of the investment in what promises to be a hugely successful career.