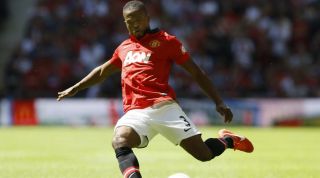 It took Manchester United just six minutes to open the scoring under David Moyes’ reign, in the 2-0 Community Shield victory over Wigan.

The goal was typical of the approach Moyes favoured in recent seasons at Everton; left-back Patrice Evra scampering forward to swing in a cross for Robin van Persie to head home.

Although the Dutchman isn’t renowned for his aerial ability it’s an area he’s consistently worked on since becoming an out-and-out striker. In his final couple of seasons at Arsenal he often stayed behind on the training ground to hone his heading.

It could have quite easily been an Everton move featuring Leighton Baines and Marouane Fellaini – the combination that repeatedly exposed Manchester United on the opening weekend of last season when Everton recorded a fine 1-0 victory.

Clearly, Moyes’ bids for both Baines and Fellaini this week – dismissed by Everton as “derisory” (seemingly the standard rejection response these days) – means he’d like to reunite that combination at Old Trafford.

However, even if Baines and Fellaini stay at Everton it seems United will continue to attack via their experienced left-back. In the comfortable 4-1 victory over Swansea, United struck from a variety of sources and angles, but again it was particularly noticeable that Evra swung in two excellent crosses for Van Persie chances – and he took up an identical position for both deliveries.

Evra was particularly involved going forward. Ryan Giggs started on the left and drifted inside, in contrast with the right-sided Antonio Valencia, who stayed close to the touchline. That opened up space on the overlap for Evra to repeatedly storm forward.

Interestingly, no United player completed more take-ons than the Frenchman.

It’s fair to question whether Baines would be a significant upgrade on Evra, especially considering Everton are likely to hold out for around £20m. The Frenchman’s form did take an obvious dip a couple of seasons ago but last year he appeared rejuvenated.

While it wasn’t uncommon for Evra to start all 38 games in recent campaigns, Alexander Buttner occasionally played last season to allow the 32-year-old a rest. Perhaps the competition from the Dutchman forced him to work harder for his place.

He also, somewhat surprisingly, became a consistent aerial attacking threat, and continued that good performance at Swansea by winning all three of his aerial duels.

Baines, certainly, is an excellent attacking left-back, but he might consider Everton perfectly suited to his talents. Last season he played in a side that switched play regularly from flank to flank, generally had two tall central targets for his crosses, and had a brilliant relationship with Steven Pienaar down the left.

He will also benefit from the arrival of Roberto Martinez by effectively becoming an attacking wing-back in a more fluid system.

There’s no reason Moyes can’t restructure Manchester United slightly to bring the best out of Baines, but Everton’s approach was sometimes one-dimensional and overly dependent upon their star man last season.

It’s acceptable to rely on crossing when there’s a lack of genuinely creative players in the side, but Moyes now has a more talented squad for whom wing play should be one of many approaches, rather than the most prominent strategy.

A cross-first strategy is unlikely to reap rewards at United. So, by continuing to provide a couple of accurate crosses to the club’s Dutch talisman each game, he’s probably doing enough.