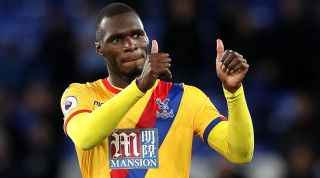 What were the last words Jurgen Klopp told him? For the briefest of moments, Christian Benteke winces. Then he contemplates the question. His sojourn in Liverpool yielded neither the sporting results nor the existential joy that he'd envisaged. Benteke was a peripheral player in the Klopp-instigated revolution.

“Klopp said that I was a good player but that I wasn’t a part of his plans,” the Belgian reflects with FourFourTwo.com. “When Klopp arrived at the club, he had his visions and ideas about football, but that didn’t include me. It’s hard to be part of something when you're sidelined.”

Last Saturday Benteke and Liverpool met again, this time at Selhurst Park. As per tradition, Klopp lauded Benteke in his pre-match press conference – not as the complete striker, but as the player Liverpool feared. Benteke wasn’t feeding off balls from the incisive Philippe Coutinho; he didn’t link up with the lethal Roberto Firmino either, but instead, donning Crystal Palace's shirt, he hassled Liverpool’s defensive pairing of Dejan Lovren and Joël Matip. The inspired visitors outplayed Palace and won 4-2.

“Last year I scored the winner against Palace,” the striker tells FFT in a small Wimbledon tearoom, where children wander around in fairy costumes for a Halloween party. “This season I played for Palace against Liverpool. In football, yesterday’s truth isn’t today’s truth.

“Perhaps Klopp liked the Benteke who played at Aston Villa, but perhaps he changed his mind at Liverpool. I blame neither Klopp nor Liverpool. I always took my responsibility, but the few times that I did play I would have wanted to do better.”

Won over by Pards

Benteke had three half-chances against his old club but didn’t score; so far, he's netted three goals for Palace since his arrival in August. Alan Pardew had courted the Belgian before Euro 2016, when he had a lengthy face-to-face conversation with him. Here was a manager who wanted him, valued his skills and attributes, and even considered him a potential saviour to Palace’s goalscoring problems.

That struck a chord, and Benteke was convinced: south London would be to be his next destination. He instructed his agent Eris Kismet to get the deal with Palace done. “Pardew was the first coach with a real interest after the end of last season and before Euro 2016,” Benteke recalls. “He told me that I am a young player who requires game time and still needs to improve. Pardew has the ambition to aim for the top half the table. Palace have been in the Premier League for a number of years, so why not?”

The Belgian striker was Palace’s marquee summer signing. He's now the focal point at Selhurst Park, and must do what Connor Wickham, Emmanuel Adebayor, Fraizer Campbell, Marouane Chamakh and Patrick Bamford failed to do last season: become a natural target up front, rekindle Palace’s scoring power and, with it, bring a degree of reassurance to the club.

Pardew’s template at Palace is straightforward: absorb pressure and break quickly down the flanks. It’s Steve Coppell 2.0, with uncompromising wing play and plenty of crosses into the box. The team is resilient and counter-attacking is one of their fortes; the system should be a natural fit for Benteke. He can’t invoke any discordance between his playing attributes and Pardew’s setup.

“Palace try to play via the wings and exploit my strengths,” says Benteke. “We cross a lot and I speak with the midfielders – with Wilfried Zaha, Yohan Cabaye and Andros Townsend, because they can all provide me with assists.”

But does he go as far as acknowledging that the formation is in part set up for him? “Last season, Palace played with the same type of system,” he replies. “Pardew works with tall strikers – Adebayor and Chamakh are similar to me. I am good in the air, but we can also play over the ground and our fast players can infiltrate the box.

“Jason Puncheon and Cabaye can mix it up. It's not just about crossing and looking for Benteke. We can shoot from outside the box. We have a few speedy players. We're strong at set-pieces with our defenders. So that’s why I don’t feel that the system is adjusted to me – but the system does fit me.”

Benteke scores the winner against Sunderland

Benteke faces the same issues – a new coach and a new system – with his national team. At Euro 2016, Belgium disappointed with a surprise quarter-final exit at the hands of Wales. In their opening game, they were outwitted by Italy’s 3-5-2 formation, a feat Chris Coleman's charges repeated in the knockout phase. Benteke received limited playing time, with substitute appearances against Ireland and Sweden all he had to show for his time in France.

“At the time, [Marc] Wilmots tried to do his best,” the striker says. “After the result, you can argue that ‘yes he should have done this or that,’ but then it’s too late. Belgium had a chance to reach to the final. Both the players and the staff were responsible for the disappointing result.”

The Belgian FA picked Roberto Martinez as Wilmots’ successor, convinced by his Premier League pedigree, his knowledge and his future vision for Belgium, as well as being charmed by his ‘Spanglo’ flamboyance. He switched the formation to a 3-4-3, and Belgium currently top their World Cup qualifying group after three straight wins against Cyprus, Gibraltar (against whom Benteke scored a hat-trick) and Bosnia & Herzegovina.

“I was surprised when I heard [about] Martinez’s appointment,” Benteke admits. “He may not have been the No.1 name that you’d expected, but he's a good manager with experience in the Premier League. He knows everything about this league. In the first meeting with the players, he set out what he wanted to do with Belgium, where he wants to go and how to do it. He was quite clear about it.”

Working with a hero

Martinez has sky-high ambitions for Belgium; participation in the 2018 World Cup is considered a formality, reaching the quarter-finals in Russia a bare minimum. He's brought along Thierry Henry as one of his assistants to try to achieve those goals. Benteke delights in hearing the name of the Arsenal icon, his face lighting up instantly as FFT asks him about the former Gunner.

“Henry has been my hero, my favourite striker,” the 25-year-old grins. “In the beginning it was a bit weird to stand next to him on the training field. I was used to seeing him on TV, but after the initial contact, it started to become normal. He's a normal human being. He gives us advice as a striker.”

At the age of 25 Henry had just won the Premier League title. Benteke realises he's at a critical junction in his career at Palace. “I have my best years still ahead of me,” he insists. “I have to stay fit, score a lot of goals and win everything that I can win.”