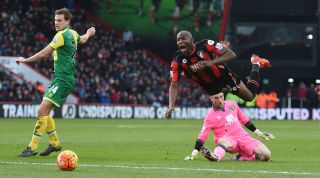 Facing a team that has conceded six goals in their last two games (against Bournemouth and Stoke), injury-hit Liverpool may view this as a chance to rediscover their goalscoring touch. However, Norwich’s deep and compact shape helped them defeat Manchester United 2-1 at Old Trafford in December – and Liverpool are particularly vulnerable to the counter-attack.

Of the last six goals Norwich have conceded, five have come down their right-hand side and all of these goals have resulted from overlapping runs and balls into the box. This follows the general trend of their season; Norwich’s back four is arguably the slowest and most immobile in the division, frequently opened up by threaded passes but competent with no-nonsense clean-up work (centre-back pair Sebastien Bassong and Ryan Bennett average a lowly 1.8 tackles per match between them, but make a combined 16.9 clearances). New signing from Wolfsburg, Timm Klose, should add some quality once bedded in.

Norwich make the fewest interceptions and the second-fewest tackles in the Premier League, reflecting the cagey, back-tracking approach of a team with centre-backs out of their depth. The manner of the goals they have conceded in recent weeks highlights how Liverpool must approach this game tactically; as Roberto Firmino drops off from the front, his supporting attackers must make runs in behind the Norwich defence. It is from such movement – overlapping full-backs and wingers making runs on the inside of the right-back – that Spurs, Bournemouth, and Stoke exposed Norwich’s shortcomings.

If Philippe Coutinho and Daniel Sturridge were fit then this task would be fairly easy, but as the 1-0 defeat to Manchester United exemplified, Liverpool are not moving freely of late. Norwich may be able to repeat the tactical system that helped them beat Louis van Gaal’s team in mid-December.

That day, Norwich held just 29.6% possession, sitting so deep as to deny space in behind Bassong and Bennett. United were frustrated at one end and caught out at the other, their high line leaving gaps for Nathan Redmond and Alex Tettey to exploit.

Liverpool’s somewhat laboured football in the final third could cause a repeat of the scenario at Old Trafford. If Jurgen Klopp’s team dominate possession in the same way and thus creep higher and higher up the pitch (they catch the second-most offsides – 2.8 per game), it is certainly possible for Norwich to punish them on the break: Liverpool are dispossessed more times than anyone else (15.8 per game), and are the most error-prone team (22 to date).