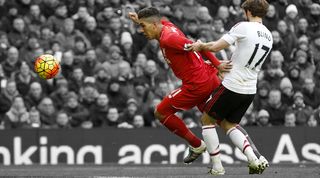 It’s difficult for Liverpool to take many positives from Sunday’s 1-0 defeat to Manchester United – a game where Jurgen Klopp’s side had the upper hand for long periods, before conceding yet another sloppy goal from a set-piece.

The main reason to be cheerful was another fine performance from Roberto Firmino. After hitting two goals in the thrilling 3-3 draw against Arsenal in midweek, the Brazilian now looks settled in English football and is already a major part of Klopp’s side.

Firmino was fielded as Liverpool’s central forward against United, a role he’s become accustomed to under Klopp. As a general rule this has worked effectively against big sides who play high defensive lines, but has faltered against sides sitting back because his movement and link play is less effective when attempting to break down a parked bus.

It’s become common to refer to any unconventional forward as a ‘false nine’, which somewhat misunderstands the phrase. A false nine isn’t simply a midfielder playing up front – Marouane Fellaini, for example – but when a side’s supposed striker actively takes up a midfield position rather than a centre-forward position. That’s precisely what Firmino did – he was more of a No.10 than a No.9.

Firmino repeatedly dropped off into midfield positions, which tempted United centre-back Daley Blind up the pitch to mark him. In turn, left-back Matteo Darmian tucked inside to cover for Blind, taking up very narrow positions, and therefore space opened up for Liverpool to break into down their right. Most of their good build-up play took place down that flank, partly as a result of Firmino’s drifts.

The Brazilian tended to move more towards the right flank, from where he’s a goalscoring threat with his left-footed drives. But his role was equally about encouraging others forward – and this is where Liverpool struggled after an initially bright start.

Klopp deployed a system which looked like 4-3-3 on paper, but became more like 4-3-2-1 with Adam Lallana and James Milner drifting inside into central positions. With Firmino often close to Lallana and Milner, at times it wouldn’t have been unfair to call it a 4-3-3-0.

But whatever you call the system, the crucial thing when utilising a false nine moving deep is to have movement, pace and a goalscoring threat going the other way. Leo Messi’s false nine role at Barcelona, for example, was made possible because David Villa and Pedro always went in behind from wide.

Lallana and Milner, it’s fair to say, don’t offer anything like that threat. Lallana hasn’t registered in the Premier League this season, while Milner has managed just one goal from open play (and one from the penalty spot). But in the early stages here, surprisingly, Liverpool actually played the system to perfection. Firmino came deep, the other two went in behind.

Liverpool’s best chances of the game both came inside the first 15 minutes from this approach. First, with Firmino coming deep and dragging United’s defenders towards the ball, Lucas Leiva hit an excellent long pass over the defence for the onrushing Lallana, who found himself with an awkward, unusual headed chance with David de Gea off his line. Lallana’s header lacked power, but the approach made sense.

Shortly afterwards, Liverpool got in behind again. Firmino dropped deep, and this time he was the man to thump a brilliant diagonal pass out towards Milner, who raced in behind but drove over the bar from a narrow angle. Liverpool’s gameplan was working excellently.

From there, things went downhill. Maybe the home side had too much possession, dominated the game and allowed United to drop deep, which then meant this approach was less viable. Lallana and Milner started popping up in central positions much more frequently: with no space to go in behind, they instead moved centrally and played in front of United. There was little goal threat as the match continued, and Klopp inevitably turned to Christian Benteke – albeit very late in the second half.

It remains to be seen whether Liverpool can play this way successfully in their upcoming games against teams who sit deep – Norwich, Leicester, Sunderland and Aston Villa. If Klopp can find some goal threat from wide, perhaps from Daniel Sturridge, this false nine system might become very exciting.