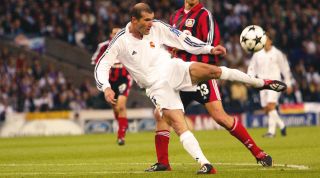 It's 18 years since that Champions League final goal.

When we think of Zinedine Zidane's magnificent playing career, we tend to think about how it ended. But really, he was one of the most magnificent footballers the world ever witnessed.

The things that Zizou could do with a football could take your breath away. He wasn't even a goalscorer either - not really - but he still scored against 64 different clubs, for four different sides, in an array of competitions.

Yes, the great Zinedine Zidane once played in the Intertoto Cup.

One more time, as fellow Frenchmen Daft Punk would say, let's celebrate the brilliance of Zizou with another quiz about the man himself.