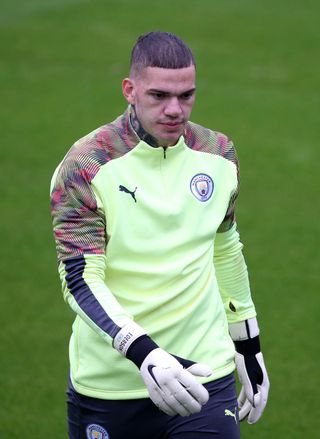 Manchester City goalkeeper Ederson is a doubt for Sunday’s crunch clash with Liverpool after suffering a thigh injury in Wednesday’s Champions League tie against Atalanta.

The Brazilian was replaced at half-time at the San Siro as a precaution after feeling uncomfortable in the closing stages of the first period of the 1-1 draw.

To compound matters his obvious replacement for the top-of-the-table Premier League encounter at Anfield, Claudio Bravo, would hardly go into the game with confidence after being sent off late on in Milan.

Asked about Ederson’s injury, Guardiola said: “It’s a muscular problem, not big, but it was a risk.

“He didn’t feel comfortable and that’s why we decided to make a substitution.

“Honestly, right now, I don’t know (how bad it is). He’s strong and we’ll try with him, but we won’t take a risk. We’ll see tomorrow.”

Bravo was sent off for bringing down Josip Ilicic as Atalanta, who had previously not registered a point in Group C, chased a surprise late winner.

Guardiola has every confidence Bravo would be able to perform at Anfield if required.

City are already likely to be without playmaker David Silva, who missed the trip to Italy with a muscular problem. City trail Liverpool by six points heading into Sunday’s game.

In terms of Europe, the draw meant City missed their first chance secure qualification for the last 16.

Raheem Sterling struck early but Gabriel Jesus missed a penalty in a frantic end to the first half in which City were awarded another spot-kick, only for the VAR to change it to a free-kick.

City were stung when Chelsea loanee Mario Pasalic levelled with a bullet header and in the end they were grateful to hang on for a draw with Kyle Walker in goal.

Guardiola said: “It’s the Champions League and it’s 90 minutes. Show me a team who controls for 90 minutes.

“We made an incredible first half against a tough team but in this competition you have to take chances.

“We have to take hats off to Atalanta. We’d seen them and knew what a good side they are. Ask Italian teams how hard it is.

“Four points (against them) is a big success with the injuries and difficulties. We played well and then dug deep.”

Atalanta were thrashed 5-1 by City a fortnight ago and their coach Gian Piero Gasperini was pleased with their response.

“We earned a great point,” he said. “We learned our lesson from the first match.

“The aim was to qualify but we can at least try to get Europa League football.

“It is very tough to cause problems for a team like Manchester City as we did tonight.

“We struggled until they missed the penalty. That was the turning point. In the second period our attitude changed and we produced a great performance.

“In the end we were looking to win it.”