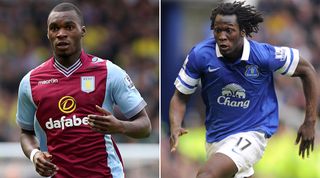 Benteke vs Lukaku: the battle of the Belgian bricksh**houses.

It would be a sight to behold wouldn’t it? Christian Benteke and Romelu Lukaku taking part in an old-fashioned trial of strength. Can you imagine: just who could shuffle the furthest with the carcass of a battered Mini Cooper strapped to their shoulders? Tearing through as many copies of the Yellow Pages as possible in under a minute: place your bets. And who’d take it in a classic arm wrestle? We don’t know, but we're sure it’d be scary and exhilarating at the same time, like watching a lion fight a shark.

Watching both forwards in action as Aston Villa host Everton could be as enthralling. Paul Lambert will be hoping Benteke’s introduction as a sub against Tottenham is a sign of better things to come. For 10 minutes after coming off the bench against Spurs, the dome-headed forward looked as if he might single-handedly (or should that be headedly?) drag Villa back into the game, having already roused his team-mates and the crowd through his sheer presence. Within 23 minutes he'd already won a game-high seven of seven aerial duels.

In his absence, big-money summer signing Libor Kozak has failed to convince, the Czech unable to act as the attacking fulcrum around which the counter-attacking runs of Gabby Agbonlahor and Andreas Weimann are built.

Everton travel to the Midlands trailing second-placed Chelsea by two points following their home win over Hull last weekend. The goalscorers in that victory – Kevin Mirallas and Steven Pienaar – point perhaps to the Toffees' biggest strength this season, and the reason for their lofty league position: their variety in the attacking third.

To Lukaku, Mirallas and Pienaar, add Ross Barkley, Leon Osman, Steven Naismith, Gerard Deulofeu (and to a lesser extent Nikica Jelavic and Arouna Kone) and you’re arguably faced with Everton’s best creative cast since the mid-to-late ‘80s. And of course, they have Leighton Baines, the Premier League’s best deep-lying attacker. The Villa back-line will have to be at their best if they’re to get anything.

For Villa, the only injury news that matters: Benteke should be fit to play from the start.

Everton are still missing Antolin Alcaraz and Apostolos Velios, while Darron Gibson looks set to miss the rest of the season with a knee injury.

With Fabian Delph, Ashley Westwood and Karim El Ahmadi playing as a narrow midfield trio in their previous two games, the onus to build from the back has fallen to Villa’s two rhyming full-backs, Luna and Bacuna.

And that’s unlikely to be any different this time around. How they cope with the attacking threat of Everton’s wide forwards, plus their flying full-backs Baines and Seamus Coleman, could be the key to the match. The space will be on each wings: the question is who can best exploit it?

In a match-up between two managers who have a recent history of thrusting young players into the first-team (even when they’re not quite ready) both have reason to be confident. Lambert has seen his side beat Manchester City and Arsenal and compete gamely with Liverpool, Chelsea and Spurs in defeat.

Playing Everton won’t hold any fears for his young side, who have already played five of last year’s top seven; something that perhaps explains their slightly erratic form so far and their tendency to go long: 15.9% of Villa’s passes have been hit long this season, a league high.

At first glace it would appear as if Roberto Martinez has unlocked the shackles restraining Everton’s attacking ambition under David Moyes. But a quick glace at last year’s table would suggest otherwise, with the Toffees on exactly the same points tally (15), having scored three fewer goals after eight games.

What they do have, though, especially with the emergence of Barkley, is more bite on the edge of the box. Nonetheless, few teams use width quite like Martinez's men: just 26% of their attacks are diverted centrally, fewer than only three sides in the top flight (Swansea lead in this sense, with 36% of their attacks going through the middle). Interestingly, only Sunderland have more of a left side-right side imbalance than the Toffees: 41% of Everton's attacks are focused down the left, with just 32% on the opposite flank.

Villa for a 3-2 win (if Benteke plays from the start).