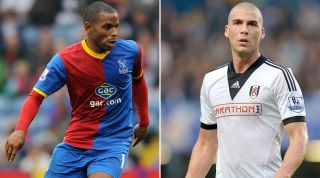 A must-win six-pointer derby between busy artisans and laconic artists.

No-one ever said the Premier League would be easy for Ian Holloway’s men, but the Eagles’ performances thus far have probably deserved more than a solitary home win to Sunderland. Last time out at Anfield two weeks ago, Palace’s pacy attacking threat was palpable.

Despite going into the break 3-0 down, Palace looked dangerous post-oranges, with goalscoring substitute Dwight Gayle and impressive young Spaniard Jose Campana combining for the free-kick that secured a second-half-winning consolation. Ex-Arsenal striker Marouane Chamakh has Premier League experience and should thrive off 20-year-old Campana’s creativity.

It’s in defence where there be demons, however, especially in the absence of Danny Gabbidon. Dean Moxey struggled against Raheem Sterling’s pace, while Adrian Mariappa – largely impressive against Liverpool – seems to have the odd mistake in him.

The contrast between Holloway’s busy buzzers and Martin Jol’s sedate collective couldn’t be starker. The Dutchman deserves credit for indulging players like Dimitar Berbatov, Bryan Ruiz and Patjim Kasami, but ultimately they have to repay the faith.

The Bulgarian controlling a football may be exactly the sort of pornographic content that fun-phobe David Cameron wants to ban, but Berbatov must do more to ensure this doesn’t turn into a slog of a season on the banks of the Thames. Rated 50/50 with a tight hamstring, the returning Darren Bent must take up the attacking mantle, so too Costa Rican 'Weasel' Ruiz, whose performances thus far have flitted between the inert and stationary. He does, though, have talent – scoring a fine volley on international duty this week.

Owner Shahid Khan has said Jol’s job is safe, but defeat at Selhurst Park could get mischievous tongues wagging again. Beware the dreaded vote of confidence.

For Fulham, Berbatov is struggling with a tight hamstring, as is captain Brede Hangeland with a sore back. Maarten Stekeleburg, Aaron Hughes and Matty Briggs are all still out, but Scott Parker may be fit.

Captain in the absence of the injured McCarthy, 29-year-old Aussie Jedinak has anchored the Palace midfield impressively. Against Liverpool, he won eight of nine attempted tackles, made several interceptions and committed only one foul.

On Monday night, he must hassle Ruiz, especially if Berbatov loses his fitness race. Last time out against Stoke, the No.11 completed an impressive 14 of 20 final-third passes. After a slow start, Ruiz has a point to prove.

Both under pressure, there could be sparks in the dugout. Fulham’s win against Stoke eased the pressure on Jol, but he will demand successive victories to climb the table. After a near full squad overhaul, Holloway must get his team to gel, and fast.

Cagey; both teams underpinned by a must-not-lose philosophy, but Fulham with just enough quality. 1-2.