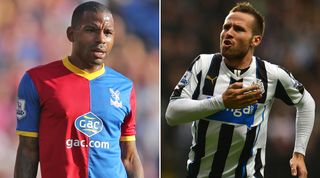 What a difference a month makes, eh? Tony Pulis is doing his best to make sure his record of never being relegated remains intact – and Crystal Palace are cautiously daring to dream.

That’s tippy-toe, baby-step, incy-wincy cautious, mind – because from now until mid-February it looks like a straightforward case of home form vs away. Next weekend Pulis’ men travel to Manchester City, before trips to Tottenham, Arsenal and Everton. At Selhurst Park, however, it’s Norwich, Stoke, Hull and West Brom coming up.

First, Palace welcome back a hero of yesteryear to the dugout as Newcastle boss Pardew, famed 1990 FA Cup semi-final match-winner, returns to south-east London for only the third time as manager.

His old club have enjoyed three wins from their last five after a torrid start as a promoted side, but remain in the bottom three a single point behind West Ham. Things are certainly looking brighter, though – Marouane Chamakh has scored in three consecutive Premier League games for the first time. FFT was distracted by a flying pig last weekend, however, and sadly missed the Moroccan’s goal at Chelsea.

But Palace have a job on their hands doing a number on one of the league’s form sides. Newcastle rose to sixth last weekend with a 1-1 draw against Southampton, moving them level on points with OMG CRISIS Tottenham having won five of their last seven matches.

With just six goals conceded in that stretch, it’s not difficult to put a finger on where things are going right for Pardew’s side. Last season only three sides shipped more than their eye-watering total of 68.

So all is rosy at St James’ Park, which leads to only one question: what the hell is going on?

Palace defender Dean Moxey should return after a hamstring problem, but the Eagles are still without Jerome Thomas, Jack Hunt (both ankle), Adlene Guedioura (ribs) and Glenn Murray (ACL).

Newcastle have only Ryan Taylor (because he’s Ryan Taylor) sidelined.

So Chamakh is flavour of the month, but he’s relying on others in this purple patch – and that’s where the likes of former Southampton man Puncheon come in.

Last weekend at Stamford Bridge the winger was the Eagles’ most creative threat, carving out 4 chances and, impressively, finding a team-mate with 5 of his 8 crosses. That 3 of those opportunities were created from set-pieces matters not – because it’s those kinds of situations where Pulis-led teams will thrive.

With two burly targets to aim for and a license to get balls into the box, it seems only a matter of time before the 27-year-old adds to his one assist this season.

So, The Pulis Factor is actually a real thing. Sure, Palace were beaten at Chelsea last weekend but they were competitive. And any manager who can make a Cameron Jerome-Marouane Chamakh double act look dangerous must be decent, right?

“The important thing is that the lads keep believing we have got a chance and keep playing with that commitment,” said the former Stoke supremo. He won’t find too many believers outside Selhurst Park just yet, but his men are heading in the right direction.

Pardew, meanwhile, is a more composed man going into this year’s January window.

The Toon boss was on the verge of a nervous breakdown before snapping up half of Ligue 1 this time last year, but that won’t happen again: “We can be very calculated in this window, there is no need to rush anything.”

Palace to score, but Newcastle to get one more. 1-2.