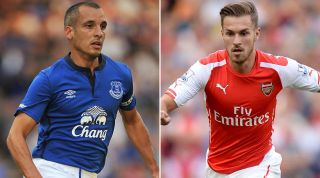 A clash between two easy-on-the-eye teams with differing European ambitions.

With the kerfuffle of the Premier League's curtain raiser done and dusted, the fixture list throws up a meeting between two teams suffering from jittery starts. Both Everton and Arsenal have European hopes this season. Both endured nervous opening-day performances.

Arsenal's narrow 2-1 victory against managerless Crystal Palace was followed up with a 0-0 draw against Besiktas in the Champions League qualifying stages. Arsene Wenger will view that scoreline as a positive given the pressurised circumstances of an away game in Turkey. However, their difficulty in breaking down a Palace team reeling from the departure of Tony Pulis will have drawn sighs of frustration.

The good news is that no water bottles have been kicked over in anger just yet. The bad is that a touchline tantrum might well be imminent should the Gunners fail to sharpen their teeth in attack. Olivier Giroud looks unfit, Mesut Ozil has only just returned from his World Cup break and Yaya Sanogo is injured. Arsenal will need to find a spark from somewhere if they're to unpick a sturdy Everton back-line.

Everton also experienced a wobble on the opening day during a 2-2 draw with newly promoted Leicester City. Manager Roberto Martinez won't draw too many negatives from the result - Premier League new boys tend to approach their opening fixtures with a cup tie spirit. But the way in which they allowed Leicester to twice come from behind in this game will have been an annoyance.

And then, of course there's the Ross Barkley problem. Everton's creative fulcrum sustained knee ligament damage in training and will be out for a couple of months at least, though there is a tone of optimism surrounding the recovery emerging from Goodison Park. Martinez will need his attacking players - most notably Romelu Lukaku - to be on their game if they're to profit here.

Arsenal, despite brimming with attacking riches, look a little weary - such is the downside of utilising so many players with World Cup CVs. Ozil is back in the squad but may not feature until the latter stages; Joel Campbell has been available, though Wenger hasn't deployed him as of yet. There may be some pack-shuffling here as the Arsenal manager brings his key players back to match speed in the coming weeks.

Barkley aside, Everton received a boost this week and announced that Seamus Coleman might be available. "Seamus was fully fit from a medical point of view on Saturday and that was a real boost," said Martinez. "I think now it's fair to say that he's considered fully fit and ready to join the group and help the team."

Ramsey was sent off against Besiktas and will miss the home leg, though he is available at Goodison Park. His presence will be key. Last year he popped up with a number of vital goals from midfield; his match-winner against Palace at the weekend proved decisive as Arsenal's strikers failed to make hay.

His surging runs will have to be tracked efficiently by Barry, who this week made hints that he was targeting an England return. Barry is a sturdy and dependable defensive option in midfield. His proximity to Ramsey may well be a decisive factor.

Arsenal are the favourites, but Martinez sees a fire in his team. "What we have in our favour is that we are still hurt from dropping two points at the weekend," he said. "I like that. It shows our standards and that we don't accept second best… Saturday is a big challenge and we're ready to face it head on."

Before the Besiktas tie, Wenger admitted his side were not quite at full strength. His more tired players will have to draw on some serious reserves if they're to cheer the bookies. "We had a short preparation," he said. "And in one week we know we have three big games - Besiktas home and away, and Everton on Saturday."