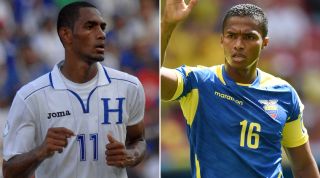 The pre-match TV coverage of Honduras's clash with France ran some seemingly unnecessary footage about them being the country with the world’s highest murder rate. After what we saw in the ultraviolence-packed 'game' that followed, however, we began to understand. The Honduras Sunday League probably supplies team hearses.

Every World Cup needs at least one country that act like a bunch of hooligans throughout the group stages before trailing off in disgrace, and Honduras have stepped up to the plate magnificently. They fouled the poor old French 14 times (although they too troubled the referee on 13 occasions), getting four yellows and a red for their efforts, and rarely bothered engaging them with any actual football. Always a big, physical team, clumsy fouling seems to have transformed into an actual game plan.

Perhaps it was just because they were facing a vastly superior France side and thought maiming would be a good way of stopping them, but don’t be surprised to see Ecuador take to the field in full ice hockey kit. The Ecuadorians fit neatly into the ‘good guys’ role here: the Tricolor are a squad bonded together by the tragic death of their star striker Christian Benitez, and determined to prove they’re capable of playing decent football anywhere, not just in their oxygen-starved HQ of Quito.

They had a good go at a class-packed Switzerland side, too, only losing 2-1 to a shattering 93rd-minute winner from Haris Seferovic – just seconds after Michael Arroyo had a clear chance to hit an Ecuadorian winner up the other end. Their commitment to playing football the right way gives them the moral high ground in Curitiba, and their attacking ability should be enough to give them the points, too.

“Coach Rueda knows Honduras perfectly. He coached them from 2006 to 2010, and he took them to the World Cup. If anyone knows how to beat Honduras, it is Rueda.” - El Comercio, Ecuador.

His team-mate Enner Valencia (no relation) grabbed the goal against the Swiss, but Reinaldo Rueda’s strategy revolves around his wingers – and the Manchester United man was a menace with his crosses against the Swiss. Garrido will be one of the defensive midfielders tasked with stopping Ecuador’s creative outlet – and if the France game is anything to go by, he’ll be doing it via the medium of knee-high tackles. Stay on the pitch, however, and the Red Star Belgrade man can help contain Ecuador’s offensive ambition.