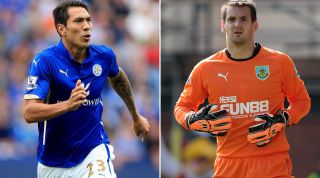 Fighting back from 3-1 down to beat Manchester United 5-3 was always going to be a tough act to follow for the Foxes, and so it proved as Crystal Palace swiftly brought them back down to earth with a bump at Selhurst Park last time out.

Leicester bossed the possession in south London, having 60.4% of it and completing 348 passes to the Eagles’ 193. But domination means diddly when you only get one of your seven shots on target, while at the other end they were undone by a pair of Palace set-pieces in the space of three second half minutes.

"The quality of the delivery was pretty good, they have some big players and we didn't quite deal with it," Nigel Pearson rued afterwards. "There will be individual errors but for the most part what you have to do against sides who put high emphasis on set-plays is not give them away. We were guilty of giving away a couple of cheap ones; we could have taken pressure off by not giving them away."

At least they have been scoring goals, nine in the previous five league games, which is more than can be said for Saturday’s visitors to the King Power Stadium, Burnley.

Scott Arfield’s 14th-minute strike in their season opener against Chelsea remains the Clarets’ only netbuster in seven matches; their paltry 2% conversion rate unsurprisingly the lowest in the Premier League (Leicester are the second best with 23%).

With last season’s prolific strike duo of Sam Vokes and Danny Ings still sidelined, Lukas Jutkiewicz has laboured up front – attempting the most shots without scoring in the division so far – and manager Sean Dyche has called on the squad to step up to the plate and start hitting the back of the net.

"It's not a concern, it's a reality," he said. "We have to affect it, we work with the players in training, we work on the mentality of it as well. Players get that weird feeling of 'When are we going to score?' or 'Who is going to score?' But one of our mantras is be the man who makes a difference, and every player has to play with that. We need one to go in of course. We've got to keep working. It's relentless."

There was a time when Burnley loved going to Leicester; they kept clean sheets in each their first five visits to the King Power, winning four of them 1-0. But the likelihood of Leicester slipping up these days is slim.

The Foxes have scored in each of their last 18 home league games and lost just one; that solitary loss – shortly after they had sealed promotion – seeing Leonardo Ulloa bag two for Brighton against his future employers.

Matt Upson is likely to be Leicester’s only absentee with a long-term foot injury, with Esteban Cambiasso and Richie De Laet recovering from knocks in time to feature this weekend.

Ings and Vokes won’t be back before the international break, with the end of November a more realistic return date for the latter. Dean Marney (hamstring), David Jones (thigh) and Matt Taylor (Achilles) remain sidelined. Nathaniel Chalobah is out after being kicked in the throat during a midweek under-21 match. Ouch.

Although not in direct opposition on Saturday, both sides will be looking for big performances from their right-backs in the quest for three precious points at the King Power.

De Laet had a mixed afternoon against former employers Manchester United in Leicester’s last home outing. Caught out by Radamel Falcao for the Red Devils’ opener, the Belgian defender recovered to end the afternoon with a game-high 7/11 tackles, succeeding with both of his take-ons in the opponents’ half of the pitch and supplying the pass for Jamie Vardy to score the Foxes’ fourth goal.

Trippier contributed 14 Championship assists from right-back last season but has admitted the improved quality of wing play in the Premier League means he isn’t gallivanting forward as much as in 2013/14.

"In the Championship wingers wouldn’t track me as much so I’m still learning," he said. "People should see a lot more of me going forward. We want to be tight at the back. I want to make sure the back is locked off first, then I’ll pick and choose my moments when I go forward this year."

Indeed, Trippier has picked his battles on when to bomb forward and when to stay back. Even in the 4-0 battering at West Brom, Tripper was able to win 6 of his 7 aerial duels on the right flank, while in the Clarets’ stalemate with Sunderland he made a game-high 12 ball recoveries as well as supplying 12 passes in the attacking third; a figure bettered by only other two other players that afternoon.

Pearson leads the head-to-head with Dyche 3-1 after five meetings that began with a Watford-Leicester showdown in February 2012, the season before the pair’s famous play-off encounters. David Nugent scored a pair of what proved consolation goals in a 3-2 Hornets win at Vicarage Road, and has gone on to net a further four goals for the Foxes in their last four meetings with Dyche’s Clarets. So prolific was the former England international against his teams, the ‘Ginger Mourinho’ was linked with a move for him in the summer, which would have seen the 29-year-old return to Turf Moor where he scored six goals on loan from Portsmouth in 2009/10.