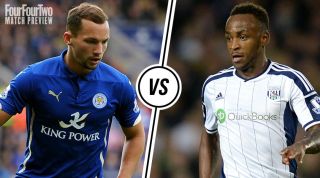 A knife edge fixture, albeit one in mid-table.

Let's be honest: not a lot was expected from either of these teams at the start of the season.

Leicester were viewed as the newly-promoted outfit with a season of despair ahead of them as they battled it out with the big boys.

West Brom, with their barely-fancied gaffer Alan Irvine at the helm, were looking to find safety in the upper echelons of the bottom six.

But to hell with predictions! While not toppling the apple cart in a manner similar to Southampton this autumn, the Foxes and Baggies have at least lobbed a few falling Granny Smiths about the gaff.

Leicester, unbeaten at home in the league, memorably bloodied the noses of one-time playground bully Manchester United with a 5-3 win.

Sadly, that's fast becoming a fading memory with each passing game and Nigel Pearson's men have failed to win since. And scoring goals? Well, that's becoming a bit of an "issue", too.

Meanwhile, West Brom travelled to White Hart Lane and its oh-so-incy-wincy-pitch and mugged Mauricio Pochettino's Spurs as they tied their laces, scratched their backsides and generally looked to the stands to wave at any agents in attendance (not many, Jan. Sorry). Crystal Palace were then sucker-punched with a penalty in the 90th minute last week to earn a 2-2 draw.

But the devil is in the betting slip detail here: the bookies are struggling to separate these two given the fact that a) West Brom's away form (Spurs aside) isn't great and b) Leicester haven't won since spanking United.

They're going for a draw. And who are we to doubt them, given we're £200 down already this season...

Bad news for Leicester's reserve keeper, Ben Hamer: the broken finger he sustained in training last week will keep him out for "three to four weeks". Development squad goalie Adam Smith replaced him during the 2-0 defeat to Swansea. Hamer joins Matt Upson at the pre-match hospitality buffet this weekend. West Brom only have defender Jonas Olsson and winger Silvestre Varela to mollycoddle.

Much chatter has been made of striker Saido Berahino, of his seven goals in nine games and his England potential. But plenty of chinwag inside The Hawthorns focuses on link-up partner Sessegnon, who has unpicked a few defensive locks this season, most notably Manchester United where both he and Berahino helped themselves to goals in a 2-2 draw. Certainly, Irvine has placed plenty of emphasis on his match-winning potential: "He's in the team to open the door for us. I would always encourage people like Stephane to take people on and run with the ball. All he's got to do is pick the right moments."

"Saido’s getting a lot of attention at the moment, he’s being asked to do a lot as well," he said. "They are away playing international games as well, and it’s a big ask. I’m sure Albion fans would be bitterly disappointed if Saido Berahino were to be suddenly injured because we weren’t looking after him."

Pearson has also been on the back foot this week, defending out-of-form striker Leonardo Ulloa, who has failed to score in his last four games. “It depends on whether we can create enough chances,” he said.

“This is something where you can’t have one without the other. Strikers need enough opportunities. Like any other player they come in and out of form as well. But it is the same for all players. Every player has experienced a loss of form at some point.”