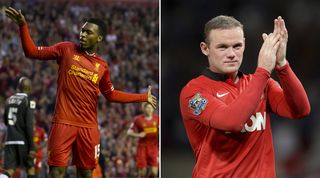 The spiciest game in English football, but without ‘you-know-who’.

We may be spared the tiresome pre-game opprobrium over whether the still-suspended Luis Suarez will shake Patrice Evra’s hand, but Liverpool against Manchester United retains a spiky edge that ignites all that is good and bad in both sets of players and fans. With 14 red cards in the Premier League era, this tempestuous north-west derby retains the passion and all-action bluster to be expected from English football’s historically most successful clubs.

Facing one of only four teams to beat them at Anfield last season, the Merseysiders have made a solid start to the new campaign, recording successive 1-0 victories over Stoke City and Aston Villa. Daniel Sturridge’s coolly taken winner at Villa Park served notice of a centre-forward who his – admittedly biased – coach Brendan Rodgers believes is “potentially the top English striker”, while Philippe Coutinho continues to impress with impish menace.

But Kolo Toure’s groin strain picked up midweek during the Capital One Cup extra-time win against Notts County could cause problems to a defence that has kept two clean sheets.

United, meanwhile, were clinical in overwhelming Swansea on the opening day, extending their fine 2012/13 away form which yielded just two defeats.

The anticipated new arrivals are thus far conspicuous by their absence, but the Wayne Rooney transfer saga seems to be at an end, his energy a notable plus from Monday’s otherwise drab goalless draw with Chelsea, while Robin van Persie and Danny Welbeck look sharp

Martin Skrtel (knee) should be fit enough to replace Toure, but if the Slovakian doesn’t make it, 20-year-old Andre Wisdom will have Van Persie to contend with. New signing Aly Cissokho picked up an ankle injury in the midweek win over Notts County, as did midfielder Joe Allen (hamstring).

United’s main question mark surrounds how Rio Ferdinand’s body recovers from the exertions of Monday night. Elsewhere, Antonio Valencia, Ashley Young and Wilfried Zaha are in contention for the right-wing berth, with Rooney expected to continue behind Van Persie.

Against Chelsea, the Serbian defender was impeccable, winning every tackle and clearance he contested. Yet three red cards against Liverpool point to an unease against the Merseysiders, even if Fernando Torres has moved on.

But there's a new agile, mobile centre-forward in town: Sturridge has the talent to trouble Vidic and make Sunday a 24th birthday to remember.

The first Sir Alex Ferguson-less M62 derby since the Scot’s 26-year Old Trafford odyssey definitively knocked “Liverpool off their f***ing perch”, this old-school clash has something of the new about it. David Moyes never won at Anfield in 12 attempts as Everton boss, while Rodgers is yet to beat his opposite number in four meetings. It promises to be an intriguing dugout duel.

These games are rarely classics, especially this early in the season. A cagey 1-1 draw.