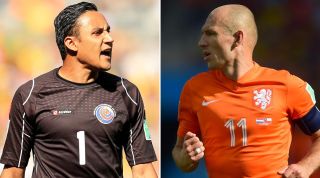 Time for one last fairytale from the world’s fourth largest banana-skin exporters?

World Cup 2014, as bewitching as it has been, has been a little bit short on surprise results since we reached the knockout stages. Despite some genuine scares – Chile being a Phil Scolari chest hair away from eliminating the hosts with a shot off the bar in extra-time; Mexico minutes from finally breaking their never-ending hoodoo; the gutsy Algerian efforts against Germany; America’s heroics – none of them actually pulled it off, and the Round of 16 went largely to expectation.

The one exception? Those crazy Ticos. Actually, it’s probably about time that we all stopped patronising the Central Americans, or calling them crazy, what with them having beaten Uruguay and Italy, helped eliminate England, and now defeated 2004 European champions Greece. This is a not a fluke; this is a very competent football team who might well make it to the semi-finals.

The question is whether they can continue their admirable muffling of the big guns after a knackering match with the Greeks in which they survived for nearly an hour, including extra-time, with 10 men, before thrillingly bashing home some of the most ruthless penalties ever seen in a World Cup.

The way Costa Rica bounced back from Sokratis Papastathopoulos’s 91st-minute goal – a real shock to the system – showed that this is a unit with unbelievable survival instinct and mental strength. And if the Netherlands do have an Achilles heel, it must be simply the nagging psychological mindbomb that they’ve never won a World Cup, even though they should have done, and history suggests they’ll cock it up.

They almost did just that against a Mexico side who largely outwitted them in the heat of Fortaleza, only to be undone by a Wesley Sneijder thumper and a Klaas-Jan Huntelaar spot-kick in the dying minutes. But their late show is now starting to convince the pessimistic Dutch public that this indeed is their year.

A stereotypically pornographic Dutch jpeg (unsuitable for a family website such as this) doing the rounds suggest that while Louis van Gaal might be something of an arrogant individual, he does however have a golden “member”. In Arjen Robben – who may or may not have dived for a number of penalties and non-penalties throughout the Mexico game – he also has one of the tournament’s golden performers.

Both sides have varied tactics and formations throughout the tournament but Costa Rica, who will be without suspended Oscar Duarte, will play a 5-3-2 and a defensively-minded, pressing midfield, while the Netherlands, who have dabbled with a similar formation as well as the traditional Dutch 4-3-3, are more likely to go for the jugular from the off in this match with an attacking XI.

Logic suggests the Dutch must go through to complete an all big-name semi-final line-up, but our greedy side fancies that Brazil 2014 may still have one more exciting twist in the tale.

“Costa Rica awoke in a euphoric daze,” muttered a massively hungover Tico Times, “after its beloved team become one of the eight best in the world. Facing incredible odds, they showed unmatched tenacity and determination. 4.8 million Costa Ricans flooded the streets. The party lasted all night. A proud president who upended half a decade of traditional political rule celebrated with his people.”

The Dutch were too relieved to go on the lash. “Holland is through to the quarter-finals of the World Cup and it’s nothing short of miraculous,” wrote a heavily perspiring Algemeen Dagblad. “Not Oranje, but Mexico were the more dangerous side. The final six minutes were the Miracle of Fortaleza.”

The Ticos would probably not have made it to extra-time, let alone penalties, without their superb glovesman, who beat away a late Gekas effort to stop the Greeks winning it at the death of normal-time, as well as pulling off a worldie against Dimitrios Salpingidis earlier in the game.

His palms will probably have steam coming off them by the end of this one. Robben had a quiet first half against Mexico – a good penalty shout being his best contribution – but in the second period he was relentless, winning 4 out of 5 take-ons, creating 4 chances and securing the crucial spot-kick.