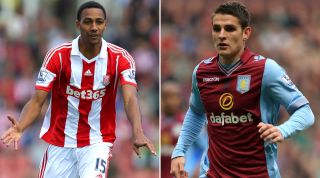 A chance for both teams to swim clear of the relegation whirlpool… for now.

Right now, no one is talking about either of these sides as candidates for the drop, but a defeat on Saturday, coupled with the results of other teams, and they could find themselves looking over the precipice.

A win at the weekend would act as the perfect springboard heading into the busy festive period. Come out the other side of this having taken a beating and it’s hard to scrap your way out again.

Mark Hughes’ Stoke, five points above the drop zone, have a challenging month ahead. After facing Villa they travel to in-form Newcastle before playing Tottenham at White Hart Lane on Boxing Day. January doesn’t get any easier with a trip to Everton, before they host Liverpool and then face away fixtures at fellow strugglers Crystal Palace and Sunderland.

Hughes admitted Manchester United deserved their League Cup quarter-final win in midweek, but he knows securing their Premier League status is far more important. Their current league form shows they’re full of heart, but lack the defensive steel of old – they’ve drawn four, won two and lost one of their last seven. In this period they’ve scored nine and conceded 10.

Meanwhile, just a point separates Paul Lambert’s 11th-placed side from the Potters, and their form almost mirrors this weekend's opponents. They’ve won two, drawn three and lost two, but worryingly those two defeats have come in their last two games against Fulham and Man United, where they have conceded five and scored none in the process.

Lambert needs star striker Christian Benteke to rediscover his scoring touch. The Belgian, who scored 19 goals in the Premier League last season, has only found the net four times in 14 appearances and hasn’t scored for 10 games. A goal on Saturday could kickstart his season as Villa prepare for matches against Palace, Swansea, Sunderland, Arsenal, Liverpool and West Brom.

This fixture will attract little interest over the weekend, but for the clubs involved it’s a crucial one.

Ryan Shawcross, Matthew Etherington and Robert Huth are missing for Stoke through injury and on-loan Stephen Ireland cannot play against his paymasters. Villa boss Lambert may have not fancied the Republic of Ireland international, but given his current form he’ll be glad to see him sidelined.

Week-in-week-out N’Zonzi is one of Stoke’s standout performers. The athletic midfielder helps his team offensively and defensively – but don’t just take our word for it, look at the stats.

During the Potters' dramatic 3-2 win over Chelsea he was his side’s top passer, finding a team-mate 45 times. He wasn’t just recycling possession but being positive with the ball too, playing 11 passes in the attacking third – more than any of his team-mates. He also made his presence felt in the battle with 9 ball recoveries.

In Stoke’s 4-2-3-1 formation, N’Zonzi sits in the centre of park – and on Saturday he’ll come up against Ashley Westwood in Villa’s 4-3-3. In such an attacking formation, Westwood is going to be outnumbered in midfield – it will be his job to get on the toes of N’Zonzi in possession and then get the ball forward quickly when he has it. Villa have the weapons to do damage with  pacey trio of Gabby Agbonlahor, Benteke and Marc Albrighton.

Westwood showed his ability to move the ball at speed against United, even if his side lost 3-0. Only Tom Cleverley had superior passing numbers on the day, as Westwood completed 51 of 62 attempted exchanges. Again, his stats in the attacking third (17 completed passes) were only bettered by one United player.

Both managers are trying to steer their respective clubs forward during periods of transition. For Hughes and Stoke, it’s a shift in culture and playing style.

Under Tony Pulis the Potters played the percentages and got stuck into their opponents. Hughes wants to move away from this approach and adopt a more attacking, expansive, technical game. It's brought added excitement and goals at least, with a 3-3 draw against Swansea and 3-2 win over Chelsea, but on the flip side there’s been a 4-0 loss to Everton and 3-2 defeat at the hands of United.

Lambert has a different challenge on his hands in trying to guide his group of young, inexperienced players through an unforgiving Premier League campaign. As with a team trying to change its culture, a team populated with youth has its good days and bad ones. But with Villa such an unpredictable package, calling which one you’re going to get is near impossible. They’ve beaten Arsenal, Man City and Southampton, but lost to Fulham and drawn with the likes of West Ham, Sunderland and West Brom.

Villa’s pace in attack to make the difference – the visitors to win 2-1.