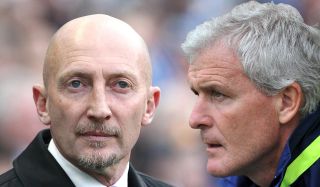 The first ever Premier League meeting between these clubs promises a bit of a dogfight even at this early stage. With both teams expected to be in the mix down at the bottom come May, the points won or lost here might really matter nine months from now.

Both teams lost their opening game to a single goal but the narrow margin of defeat served only to paper over the cracks. At Anfield, Stoke conceded possession and territory to Liverpool, allowing an alarming 25 shots on their goal, including 11 on target. That they came away cursing Jon Walters’ fifth penalty miss for depriving them of a point was primarily down to man of the match Asmir Begovic’s inspired goalkeeping, as he recorded a weekend high 10 saves.

Palace's rigid defence stifled Spurs in Sunday's season opener at Selhurst Park, but Ian Holloway will be concerned that his side only briefly had their more illustrious visitors worried at the other end.

So to Mark Hughes' first home league game in charge of Stoke. After four defeats in their last six home games was enough to see off Tony Pulis, the Potters will be keen to rebuild fortress Britannia where they were unbeaten from August to January last season.

Brek Shea (leg) and Wilson Palacios (illness) will both definitely miss out for the hosts.

With Wilfried Zaha gone and Glenn Murray a long-term injury absentee, Palace need to find goals from somewhere and the burden falls on Gayle, a summer signing from Peterborough, where he notched 13 times last season.

Just two seasons ago, the 23-year-old was turning out for Bishop’s Stortford and his performance against Spurs suggests he has much to do to make an impact at this level. Not only was he a peripheral figure, but as his Stats Zone screen shows, he was all over the place. As the team’s attacking spearhead, Gayle must do more work in and around the Stoke penalty area.

Given his team should enjoy more possession at the Britannia than they did against Tottenham, he should get more of a chance to show his worth this time around.

Hughes thinks we all want him to do well this season, which is of course true unless you're anything other than a Stoke fan. The notoriously slow starter watched Simon Mignolet dash his hopes and dreams at Anfield last weekend - so things can only get better for Sparky from here on in.

Holloway, meanwhile, has already played his 'little old us' card after Palace's defeat to Spurs, and was subsequently charged by the FA for his petulant protest. The wise-cracking Bristolian has only faced Hughes twice, going down 3-0 against his opposite number's Fulham side in 2010/11 after a 2-2 draw at Bloomfield Road.

Stoke will be too strong for Palace, in more ways than one. 2-0.