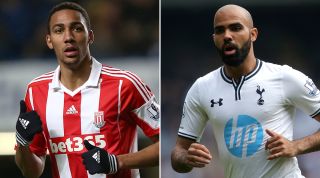 Two teams filling a Match of the Day late slot.

THE END, as the man with the big placard likes to announce, IS NIGH, but these two teams move towards the summer in very different frames of mind.

Stoke head into the final three games with a spring in their step and a head full of happy, positive thoughts. After a bleak midwinter run of four consecutive defeats in January, Stoke have been beaten just twice in their last 12 games – winning six of them and drawing four. But it's the frisky manner in which they have progressed that has the locals slobbering.

Mark Hughes is Tony Pulis's polar opposite; embracing a brand of slick, attacking enterprise that would have Pulis waking in a cold sweat.

No longer able to plunder the petro-billions of a rich owner, Hughes has bought, borrowed and swapped wisely – Stephen Ireland, Marko Arnautovic, Oussama Assaidi and Peter Odemwingie offer significantly more fizz than the regulars had grown accustomed to.

This new model Stoke sit 10th in the table going into this one (on 44 points) and could yet end the season as high as eighth – four places higher than their previous best of 12th in 2009. So while their season is all but over, they still have a carrot of sorts.

Tottenham's mood is markedly different. Despite being just about on course to equal their highest Premier League points tally (72 last season), which in itself should suggest positivity and progress, they head towards the summer under a cloud of uncertainty.

Perceived wisdom and gaseous speculation suggest the replacement manager Tim Sherwood will be replaced once the season is over by an older, wiser, more respected European heavyweight coach who knows tactics better and knows when to keep his mouth shut.

Whoever this mystery saviour turns out to be will inherit a squad that has largely underachieved and who could, with just a few exceptions, be shipped out with little complaint in the summer.

This was meant to be a season in which the 39 players bought in with the Bale bullion last summer bedded in before embarking on a glittering, Liverpool-esque title chase. Instead, Tottenham are sixth in the table and almost guaranteed to finish sixth in the table.

They're in no fit state to "do a Liverpool" next season and look likely to have the distraction of Europa League games and Sunday kick-offs again. Four wins, two draws and four defeats in their last 10 games works quite accurately as a snapshot of their season. The End that is nigh can't come quickly enough for Spurs.

For Stoke, Matt Etherington (back) and Robert Huth (knee) are currently out of commission. Erik Pieters turned up with a sick note and is likely to be excused. Spurs defensive lynchpins Michael Dawson (hamstring) and Jan Vertonghen (groin/pelvis) are expected to be in contention, but it's too soon for Kyle Walker (groin) and the slowly recovering Etienne Capoue (ankle), while poor old Erik Lamela (various) won't play again this season.

Amid talk of a move elsewhere this summer, Hughes has been quick to talk up the importance of N'Zonzi in his grand plans. "We are trying to build the club and build the team, and he is very much integral to that process," said Hughes, lightly piqued that all talk appears to have come direct from the mouth of the French midfielder.

Describing him as integral is backed up by the stats from Stoke's last outing, the 1-1 draw at Cardiff, where N'Zonzi attempted and succeeded with more passes than any other player on the pitch – 81 from 90. Many of those passes were exchanged with fellow metronome Glenn Whelan, but a healthy 27 of them fed Arnautovic (14) and Ireland (13), allowing Stoke's attacking threats to rampage further forward.

On a busy afternoon, N'Zonzi even found time to concede Cardiff's penalty, which could be painted as a negative, only we prefer to think it shows the influence he had all over the pitch. Integral to that process, see.

Fully aware there are just three games left,  Hughes has one eye on next season and his most pressing task appears to be convincing Liverpool to let him make Assaidi join them on a permanent deal, or if not Assaidi then someone like him.

"We need that threat, those players that make a difference in the final third," he said. And he added: "Game changers, players with an X-factor who can create things when you're not playing well."

Sherwood's in no position to be planning ahead.

He spent this week defusing a Twitter bomb left by Sandro – "Lol lol lol" – and wondering how much Mr Levy will pay him to go away. His eccentric brand of old school management and fine line in gilet will be missed.

A surprisingly entertaining draw, most likely one apiece.