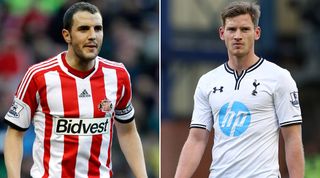 One of these days, maybe, just maybe, Gus Poyet might be thrown a bone by his Sunderland players.

In his first game the Uruguayan was subjected to a 4-0 tonking from Swansea. Against Hull two players lost it and were sent off before half-time.

At Stoke a refereeing balls-up saw Wes Brown wrongly sent off. And then on Wednesday, Phil Bardsley’s stupid own goal gifted Chelsea an unassailable two-goal lead at the Stadium of Light.

Bottom of the league with eight points, something has to start going right soon for the Black Cats. Credit where it’s due – they performed admirably against Jose Mourinho’s men in midweek only to be undone by a team of better quality. No shame there.

But the Wearsiders have thrown away a league-high eight points from winning positions this season, and have now put through their own net four times. They’ve had the fewest number of shots on target, and only scored more goals than Crystal Palace.

And now things could get worse with the visit of Tottenham, another former club of Poyet’s, in Saturday's teatime clash. Sure, Andre Villas-Boas’ side have problems of their own, but they showed character on Wednesday with a late comeback win at Fulham.

In a game where their busy summer came up trumps, it was a somewhat forgotten man in Lewis Holtby who grabbed the winner at Craven Cottage. The depth is there at Villas-Boas' disposal... now for the consistency.

They certainly don’t need motivation, that’s for sure – there’s a 10-point deficit to make up on Arsenal for starters…

Sunderland should only be without centre-back Carlos Cuellar (hip) and goalkeeper Keiren Westwood (shoulder), who could both return the following weekend.

Injuries aren’t too unkind to Spurs either, with Christian Eriksen (ankle) the only short-term absentee of note. Emmanuel Adebayor (knee), Danny Rose (ankle) and Harry Kane (back) make up the numbers.

He didn’t score at Craven Cottage in only his second start of the season, but the England man did just about enough to retain his place ahead of Roberto Soldado for this game. It could be Defoe’s last season (or even month) at Tottenham before he’s sent packing elsewhere, and the former West Ham man will want to go out in positive fashion. While the media have questioned his exclusion in recent weeks, the truth is that the 31-year-old just isn’t quite up to scratch for regular football at Spurs anymore.

Nonetheless, he created an admirable 3 chances for his team-mates on Wednesday and attempted 4 shots at Maarten Stekelenburg’s goal. But if he’s to stay in the first team much longer he’s going to have to turn a few of those red/grey arrows blue, and almost definitely yellow. He’ll want to break his duck against Sunderland anyway, having failed to net in 10 Spurs appearances against the Black Cats.

On one hand there's Poyet, domineering and unpredictable; on the other Villas-Boas, quiet, composed and yet persistently unpopular with the daily rags. The Daily Mail appear to have dampened their daft crusade against the Portuguese for now at least, but there’s no doubting that the former Chelsea boss is under pressure from all angles to string some positive results together.

In one of the most competitive Premier League campaigns ever, it’s games like this that Spurs must come out on top in. And in Poyet, the visitors come up against a manager with problems.

At the moment the 46-year-old is keeping his cool, but if Sunderland’s problems persist it seems only a matter of time before he cracks. At the very least, it’ll be entertaining.

Cagey, closely-fought and ultimately ending in an awkward stalemate. 1-1.