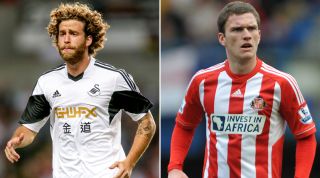 Them what pass a lot host Gus Poyet and 11 players.

“He is the worst person I’ve come across in football,” came the not-so-glowing appraisal of Gus Poyet from former charge Vicente, after the Uruguayan’s departure from Brighton in May. "He is a selfish person, very egocentric. What I think is unacceptable is that the manager makes fun of his players. I’ve seen things here that I have never seen in my career."

Some things don’t change, at least on Wearside. If the hiring and swift firing of Paolo Di Canio has taught Sunderland anything (it really hasn’t), it should have been that snapping up an unproven yet volatile upstart should generally be avoided in the Premier League. Sigh. Have it your way.

Now, though, it’s all about turning around the fortunes of a Sunderland side rooted to the foot of the table with just a point from their opening seven matches. While it’s true they’ve faced Manchester United, Liverpool and Arsenal in their last four games, the Black Cats have also been humbled by West Brom, Crystal Palace and Fulham.

Swansea, meanwhile, have problems of their own – if not on the same scale. That said, Michael Laudrup’s men have flattered to deceive ever since lifting the League Cup in February.

They’ve outpassed the entire league so far this season, while Michu’s mean streak has finally earned him a Spain cap, but they’ve only won twice. Something will change for the better soon, you would expect – and this looks a good place to start.

Swansea’s Ben Davies (hamstring), Jonathan de Guzman (groin) and Pablo Hernandez (hip) should return after recent strains, but captain Ashley Williams (ankle) won’t be back until the end of the month.

The good news for Sunderland is that Steven Fletcher (shoulder) is in line for a comeback after missing the last two games with injury.

The bad is that Ki Sung-Yeung is ineligible to face his parent club, there’s no hope for Keiren Westwood (shoulder) or Wes Brown (calf) yet, and Phil Bardsley (ankle) should return to contention (arf, arf).

Swansea sing when they play to their Spanish sensation’s tune, but goals in the Premier League have proved more difficult to come by this season for the 27-year-old from Oviedo.

Playing just off summer signing Wilfried Bony (who hasn’t scored in the league since the opening day), Michu’s movement is a constant threat that goes hand in hand with his signature drives into the box.

Against Crystal Palace his persistence earned him a goal, while his received passes all over his opponents' half led to seven shooting opportunities.

And that’s where Sunderland’s Cattermole comes in, the man who’ll be doing his best to ruffle feathers the only way he knows how: with a rough and ready approach. Against Man United he was regularly dragged wide to deal with Nani and Rafael, but he’ll have enough on his plate dealing with Michu. Stopping the former Rayo Vallecano man could be essential, and that means Adam Johnson and Emanuele Giaccherini will be expected to do their share of donkey work in defence where Wayne Routledge and A.N. Other are concerned.

Poyet’s achievements on the south coast were good; promotion from League One as champions followed by a crack at the play-offs two seasons later wasn’t bad going. But he couldn’t get Brighton up, and his acrimonious departure left many big questions unanswered. It’s the chance of a fresh start in the North East, and one he must grab onto for dear life if he’s to be taken seriously in the Premier League.

As for Laudrup… nope, we’ve got nothing. But he’s a nice chap.

Swansea’s home advantage and, let’s be honest, better team, means they should walk away with all the points from this one. 2-1.