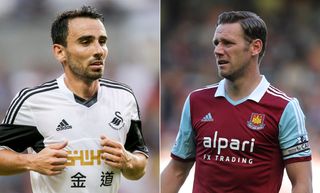 A six-pointer in the mid-table title race.

Swansea return to Premier League action this weekend having put their league home form hoodoo to rest with a 4-0 thrashing of Sunderland. Admittedly, the Mackems did give away a clumsy penalty and chuck another one in for good measure, but that won’t stop Swansea relishing the visit of a rather hot and cold West Ham on Sunday.

That said, the Irons travel to South Wales with plenty of hope in their hearts. The 3-0 win at Spurs will still be fresh in the memory and confidence should be hardly dented by the home defeat to a very competent Manchester City side. This game is set up rather nicely for two clubs who will more probably than not be occupying a league position between 14 and eight come May.

A home tie in the Europa League is welcome for the Jacks, sparing them some gargantuan trek to the depths of Eastern Europe prior to a game that they will feel is very winnable. West Ham should use the time to work out exactly how they’ll counter Swansea’s rapid passing game and mobile front-line. They’ll also want to remind themselves about giving away sloppy free-kicks around the 18-yard box: they’ve conceded three directly from areas like that already this season.

West Ham will fancy their chances of packing the midfield and hitting Swansea on the break. Defensively, the Hammers have been solid and there’s been a certain amount of “Come on then, see if you can score” attitude in the resistance shown to bigger teams than Swansea.

The Jacks will be without local lad Ben Davies and wardrobe-like defender Ashley Williams. Both are out due to ankle injuries. Leon Britton will start, a fixture one would assume he’d relish being a former West Ham player who failed to make the breakthrough in the Rio Ferdinand, Frank Lampard and Joe Cole era.

West Ham lost Guy Demel during the 3-1 Man City defeat to a dead leg. If he isn’t passed fit for the match, Joey O’Brien will fill in at right-back. It remains to be seen whether Sam Allardyce plays with or without a striker. One imagines his opposite number has seen all that before.

Britton has been enjoying his football of late and his performances reflect his love of spraying the passes round. West Ham will need to get among this kind of action if they’re going to break up Swansea’s rhythm and take something from the Liberty.

Compare and contrast the performances of Britton and Nolan in their last Premier League outings. Britton is busy, busy, busy completing a tidy 87 passes out of 92 attempted. Nolan, in contrast, struggled to get into the game against Man City and will need to do more if he winds up as West Ham’s most advanced midfielder. If it’s not Nolan, this job may well fall to Mo Diame.

Michael Laudrup up against Allardyce will have most hacks generalizing about silk vs steel, artistry vs graft and smooth vs rough. Which is a bit of a shame really, as Allardyce’s side have played some decent football this campaign, even without the much-missed Andy Carroll. The development of Ravel Morrison is a welcome and unexpected fillip, which Allardyce has been quick to capitalise on.

The two managers' approach to the game is certainly different, but it’s interesting to note they absolutely stick to their guns no matter what. Plan A remains the focus and Plan B often isn’t up to much.

There’s potential for this to be a high-scoring affair if the game plans don’t map out. Swansea to nick it 3-2.