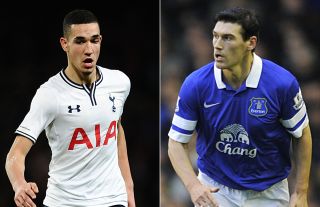 Fifth vs sixth with all eyes on fourth.

Long ago, in a time before Sky, there was a Big Five: Arsenal, Liverpool, Manchester United, Tottenham and Everton. They wanted more TV money for themselves, so they spoke to ITV suit Greg Dyke about setting up an oligopoly outside the Football League. Two years later, with the FA's help, the Premier League was born, to keep the money flowing to the top clubs.

At the same time, so was the Champions League, and now the top four English sides enter UEFA's lucrative bean-feast – while the others look on enviously. The five have been joined by nouveau-riche Chelsea and Manchester City, and seven into four won't go; worse, finishing just outside the Champions League brings the draining booby-prize of the Europa League.

Such is the background to this clash between two famous old clubs: a desperate scrabble for fourth. Should they fail, it would be of little consolation that their red neighbours are also on the same treadmill, telling themselves that finishing just behind the bronze position is "like winning a trophy".

Their board members would see a top-four finish as remunerative justification for putting faith in bright young managers – Tottenham's Tim Sherwood played in the Champions League, while Everton's even younger Roberto Martinez was 19 when it started. The fifth-placed Toffees are a point and a baker's dozen of goals clear of Spurs, who are three points and a shedload of goals behind fourth-placed Liverpool – and therefore find themselves in the unusual position of wishing Arsenal well in Saturday's game at Anfield.

To stay clear of Spurs, let alone catch the neighbours, Everton will need to improve their away record: they took two points from three January trips to Stoke, West Brom and Liverpool. That said, the bruising 4-0 defeat at Anfield was one of only two losses the Toffees have incurred in 11 games against current top-half sides (winning six), whereas Spurs haven't beaten a single top-10 side in N17. That will have to change if Tottenham are to break through the glass ceiling they helped to create all those years ago.

Andros Townsend is "champing at the bit" to return, says Sherwood, turning the infamous space-monkey into a horse. Mousa Dembele is "fine" and "in the frame to start". Sherwood's big decision will be who should partner Emmanuel Adebayor up front, if he chooses to go 4-4-2 rather than the 4-2-3-1 he's dabbled with lately.

Martinez may also welcome back some friendly faces in Seamus Coleman ("fully fit from a medical point of view… on Saturday it was too much of a risk to bring him on") and Gerard Deulofeu ("Such a positive young man… the fact he has been missed so much is a reflection of the type of person he is"). No sign yet of loanee striker Lacina Traore, though: "We will take our time with Lacina to make sure he is fully fit."

Catapulted from the youth ranks by Sherwood, who has picked him in every matchday squad and must decide whether to keep him in the first XI despite the returns of Dembele and Paulinho, Bentaleb has patrolled between the boxes with unfussy ball redistribution and an increasing appetite for the tackle.

That has caught the expansive eye of England's FA, who hope to persuade him to join the Three Lions for the 2018 World Cup. Barry, who made his Premier League debut when Bentaleb was three, has been reborn under Martinez and won't be booking a summer holiday until he sees Roy Hodgson's squad for the Denmark friendly.

Sherwood's managerial honeymoon ended with Man City bursting over the White Hart Lane threshold and helping themselves to whatever they wanted, abetted by an arguable red card for Danny Rose. But he must be doing something to earn a Jose Mourinho soundbite, his comment that City are "the best team on the planet" provoking the Portuguese to note: "Maybe, for the Tottenham manager, the planet is England" (despite Sherwood having immediately clarified his statement with "…certainly the best team in the Premier League").

Martinez is certainly delighting Evertonians and possibly exceeding expectations by almost doubling the point-per-game average he chalked up at Wigan. He has moulded his Toffees into an adaptable, attacking team – his substitutions won the game from behind against Aston Villa last week – and their ascent to top-four challengers make a pleasant change… unless you support the usual suspects. Eh, Moyesey?

Everton rarely lose the big games, Spurs rarely win them - but this one feels like a 1-1 draw, and mutual respect between the young gaffers.