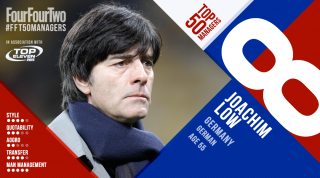 One tends to measure the quality and class of a coach – especially a national coach – purely in terms of results and trophies won. Germany's Joachim Löw certainly delivers in this department: with him on the bench, either in charge or as assistant coach, the team reached the semi-finals of five big tournaments in a row and, of course, won the top prize last summer in Brazil.

However, his greatest achievement might very well be changing not just the look but the style, the image and the reputation of a national team that used to be feared and respected rather than loved or admired – and which has now become the model almost everyone aspires to achieve.

The dark, dark days of the German game seem so far in the past that many people have forgotten why and how Löw became a member of the Germany set-up in the first place.

In 2004, after a disastrous showing at the European Championship and with the World Cup on home soil looming large, nobody with anything to lose wanted to be at the helm of a hopeless team. You could say Jürgen Klinsmann, a man without coaching experience, got the job because he was the only one who stepped forward and volunteered.

Klinsmann's one condition was that he would be allowed to overhaul everything. One day after his official presentation, he announced the 44-year-old Löw would be his assistant coach. "I haven't spent 10 or 15 years on the bench," Klinsmann said. "So I want to have a coach at my side who has."

This was only a slight exaggeration. Löw didn't have a distinguished playing career – his best years were with Freiburg in the second division – but he had already coached in four different countries (Switzerland, Germany, Turkey, Austria) and was known for tactically flexible, attacking football.

His biggest success was winning the domestic cup with Stuttgart and then taking the team to the Cup Winners' Cup final against Chelsea in 1998. But despite those results, Löw's Stuttgart contract wasn't extended. As the newspaper Die Welt put it, the club's powerful president Gerhard Mayer-Vorfelder preferred "rugged slave drivers" and was "watching with suspicion what happened on the training pitch, where there was a lot of laughter and the coach made everyone feel involved". Put differently, Löw seemed too friendly, too affable.

The decision not to extend Löw's contract turned out to be such a terrible mistake that Mayer-Vorfelder himself would soon be ousted from his post, but the damage was done. Löw had acquired a reputation for being too soft on his players – ‘the Nice Mr. Löw’ was a nickname that would follow him – and began a somewhat nomadic existence, coaching five clubs in as many years until Klinsmann came calling and said he wanted to change everything.

Of course it didn't happen overnight, but everyone who had seen an ageing, defensive, uninspired Germany lumber across the pitch in 2004 and compared it to the young, attacking, exciting team which defied all odds and almost reached the World Cup final only two years later must have been aware that this wasn't just luck or a fluke – it was a revolution.

In the years following Klinsmann's resignation in 2006, Löw proved those critics right who said he had been the main architect of the revolution as it happened on the pitch.

He also proved those critics wrong who used to denounce him as the Nice Mr. Löw. His unwavering loyalty to certain players regardless of their club form – Miroslav Klose, Lukas Podolski or Sami Khedira are good examples – was rewarded time and time again and also explains why the national team became such a close-knit group driven by team spirit. But it also meant that some players couldn't break into this circle even though the press loudly lobbied for them. Bayer Leverkusen marksman Stefan Kiessling comes to mind, or how Michael Ballack suddenly found himself shooed out of the set-up.

But that's what a coach with a vision and a plan has to do. And if the hallmark of a great manager is building a team in his image – leaving his mark on a side's style – then Löw had become a great coach long before he finally won a title, because his fluent, attacking, technically accomplished team thrilled German fans more than any side since the fabled 1972 team.

However, football being the ruthless business it is, Löw still needed the finishing touch – the final victory over Argentina in Brazil. Because at home there were growing voices that said it might be better to play like the Germany of old and actually win something instead of being flashy, exciting – and finishing second or third.

Löw at last proved you could do both: reinvent yourself and win. Not bad for a nice man.

"One of only 19 managers to have ever won the World Cup, Löw has finally added tangible success to the style which has won many admirers. After all, before last summer’s triumph Löw had only won one major trophy, the 1997 German Cup, as well as tasting success in Austria, something of a European football backwater.

"Without discrediting Löw’s part in Germany’s reinvention, it’s fair to say he was in the right place at the right time to reap the benefits of Germany’s youth football revolution. The primary factor in Germany winning last summer’s World Cup was simple: they had an excellent squad. A plethora of talented attacking players, some of the best midfielders around and a host of solid defenders. Oh, and the world’s best goalkeeper.

"Löw chopped and changed, which initially appeared like he didn’t quite know his best team. Eventually, though, he seemed to get the majority of selection decisions right, and eventually found Philipp Lahm returning to full-back, and Miroslav Klose providing a traditional striking presence, worked best.

"Whether playing on the break or dominating, Löw encourages his players to circulate the ball quickly, and has increasingly put emphasis upon changing system to take account of the opposition. However, he probably needs success at club level to be considered a great."