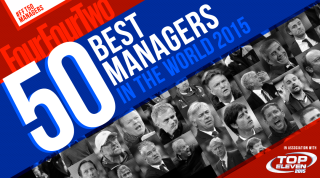 What makes Hecking so fascinating is his simplicity in a world of complex football. His style has certainly paid off for Wolfsburg. The 50-year-old took the German side from eighth to Bundesliga runners-up in less than two years, and in May lifted his first managerial trophy, the German Cup, which was also the first in the club’s history.

Some of the most successful coaches in the Bundesliga started off as relative unknowns and Hecking is no exception. When Klaus Allofs first brought him in it came as a shock to some, with Hecking a middling choice after three years at Nuremberg. But he's turned Wolfsburg into goal machines.

Not only are the Wolves entertaining, they're capable of dominating opponents with more than just possession. Their efficiency improved as the season wore, as seen against Borussia Dortmund in the cup final. They can inflict damage without seeing much of the ball; outnumbering opponents in attack, applying pressure and playing with lethal efficiency.

Last season Hecking had a strong record against top sides in the Bundesliga, including the devastating 4-1 victory over champions Bayern. He also has a knack for helping promising players realise their potential, as seen with Kevin De Bruyne, Ricardo Rodriguez and now Andre Schürrle. Not only that, Hecking is excellent with young talent and shows sensitivity in extreme situations – the tragic death of Junior Malanda a case in point. He kept the team together, and Malanda’s spirit alive. AHt

Describing himself as an “OK player who was nothing special,” Bradley decided very early on that his future was as a coach. So far it’s been a good call.

Taking his first job at Ohio University in 1981 began a long and successful career in coaching. These days the vastly underrated 57-year-old can be found keeping Stabaek at impressive heights in Norway’s top flight, as they continue to defy the odds by fighting Rosenborg at the top. At the start of the campaign they were tipped to finish towards the other end.

It comes after he expertly navigated political tensions in Egypt during his two-year stint as head coach from 2011, taking the underperforming African nation to within one game of the World Cup despite the devastating Port Said Stadium massacre that left 72 dead and halted the country’s domestic league for two years.

Bradley’s ascent has been steady. He landed his first senior coaching role with the Chicago Fire in 1998, delivering an MLS Cup and two U.S. Open Cups. While spells with Chivas USA and the MetroStars didn’t bringing silverware, it did allow Bradley to foster young talent and develop a reputation as a skilled and detailed coach.

He was handed the reigns of the U.S. national team in 2006, and won the CONCACAF Gold Cup in 2007. However, his biggest achievement came at the 2009 Confederations Cup, where his side ended Spain’s 35 game unbeaten run with a 2-0 win before narrowly falling to Brazil 3-2 in the final. Overachieving seems to come naturally. KH

The soon-to-be 70-year-old Romanian manager of the decade – the oldest boss on this list – arrived in Donetsk in 2004 after various spells in his homeland, Turkey and Italy. He immediately won the cup and league title in his first full season; only Shakhtar’s second-ever championship.

Since then he’s won seven more league titles in 10 seasons, four cups, six Super Cups and one UEFA Cup (in 2009). He made the club what it is today – well, he and the owner Rinat Akhmetov’s money that brought all that fresh Brazilian talent to Ukraine.

Over the years, the wily old manager has proved innovative, flexible and pragmatic in equal measure, his main strength picking the right approach for key games, as well as his man-management – always keeping personalities in check and getting them to work together. And that’s no mean feat.

This season marked Shakhtar’s descent from the Ukrainian throne for the first time in five years, and there was a devastating 7-0 defeat to Bayern Munich in the Champions League last 16, but it must be noted that Lucescu’s team played their home games in Lviv, almost 800 miles away from Donetsk, due to the war in their region. Shakhtar still have full faith in their grand strategist, though: he’s not old-school, just all class. AHl

Unlike many of his peers, Bauza won’t try to sell an attacking manifesto to boards before being appointed, or his squads once he’s entered the dressing room. On the contrary, he’s probably the most pragmatic – and successful – man of his generation.

Bauza spent most of his playing career at Rosario Central as a centre-back, and is used to building his teams from defensive reliability and a midfield working as an army unit. The 57-year-old has managed amazing results, including winning the first Copa Libertadores for an Ecuadorian side, Liga de Quito, and then repeating the miracle with Argentina’s San Lorenzo last season after 55 years of failed attempts. Even the Pope was publicly stating that it was about time the Crows won the coveted trophy.

Now, after celebrating for a year, San Lorenzo are again leading the Argentine league despite competing against bigger clubs with record signings; see Boca’s Daniel Osvaldo or River’s Pity Martinez. But Bauza runs his club like a small restaurant chef: rather than asking for expensive and difficult-to-find ingredients, he sticks to the basics and sees if there’s anything growing in the garden he can use effectively.

He’s managed to create winning sides with existing, low-key players, maintaining the style of the team he shapes even when stars moved and he had no money to replace them. If he didn’t win a World Club Cup it’s only because he bumped into the best Manchester United and Real Madrid sides of the last decade.

Bauza recently lamented criticism about his side’s tough-nut style, but that’s just how he is: there might no Michelin Star recognition, but results suggest few are better than him when creating state-of-the-art dishes with simple ingredients. MM

Pekerman seemed to be on the decline before deciding to take over Colombia. His only coaching experience after being knocked out of the 2006 World Cup with Argentina in the quarter-finals (on penalties against hosts Germany) came in Mexico, and on the verge of becoming 60, he’d been unemployed for almost three years.

Suddenly, though, Colombians discovered that his natural ability to be a national manager was intact. In less than a year at the helm, not only was the team playing significantly better – they easily qualified for the World Cup – but the players’ development blossomed and the bunch from a talented generation were a big success at Brazil 2014 even without their biggest star, Radamel Falcao.

Extremely calm and patient, Pekerman has become the sort of father figure that Colombia needed. He’s always thinking about the opposition goal, and would never order his team to sit back. Colombians would never accept that anyway, so it’s a near-perfect marriage – hence why they were celebrating when he extended his contract after the World Cup.

Pekerman transformed Argentina’s youth set-up from 1995 to 2007 (they won five U20 World Cups out of seven, with Pekerman in charge of three), and his achievements are still a case study for other countries that rely on his methods to bring out the best in their respective talent pools. MM