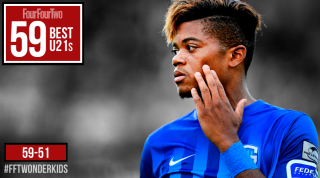 Like they did with Marco Asensio from Mallorca, Real Madrid acted swiftly to snap up Jesus Vallejo from Real Zaragoza in 2015. The centre-back had to grow up quickly too – at 18 he’d already captained his boyhood club and was handed the armband with reason.

Vallejo is a mature performer and leadership comes naturally to him – he also captained Spain's U19s to victory at the 2015 European Championship. But it’s his playing style that has won the most plaudits. He could well be Spain’s next Gerard Pique given the way he approaches his defending: smooth, subtle and extremely stylish.

Vallejo is incredibly gifted in possession and a key component in starting attacks from defence. He’s also shown the capability to play at full-back due to his speed, and also in defensive midfield given his ability on the ball. Spain fans have little reason to worry about the future of their defence. DC

On the recommendations of his close friend, the PSG defender Marquinhos, Thiago Maia signed a contract with agent Giuliano Bertolucci last summer. What does that mean exactly? Well, he could now be eyeing a transfer to Chelsea.

Blues fans should be satisfied with the link. The Santos defensive midfielder is impressive – at just 19 years old he plays like a veteran on the field, solid enough to protect the back four but with good enough passing to play a box-to-box role. He was Brazil’s outstanding man during the group phase at the Rio 2016 Olympics.

Maia excels with the ball at his feet, and can dribble his way through a pressing opposition to get his team further upfield. He’s also confident enough to play passes between the lines and is always looking to get the ball forward quickly, in a smart way. Consider yourself introduced. MA

Just a few weeks ago, this young Dane joined some illustrious company in Johan Cruyff and Marco van Basten by scoring on his Ajax debut, in his case at home to PAOK (a fine goal at that too, below).

Dolberg was signed from Silkeborg IF only a year back after being scouted by John Steen Olsen, who has a track record of spotting Scandinavian talents for Ajax — notable among them, Zlatan Ibrahimovic and Christian Eriksen.

Despite the loan signing of Bertrand Traore from Chelsea, Dolberg has been given the chance to start up front for Ajax – and more importantly, whenever given those opportunities, his performances have easily justified his selection. The 18-year-old brags speed and, particularly, a terrific shot on his right foot. Even beyond his stoic face and quiet persona, Dolberg exudes a certain calmness and lack of nerves beyond his years – perhaps similar to his compatriot Eriksen when he broke through. That’s not a bad lead to follow. PR

Capped at every youth level for Germany, product of Bayer Leverkusen’s esteemed academy system and winner of the 2016 Fritz Walter gold medal in his home nation, Henrichs has quietly appeared out of nowhere to become a genuine right-back option for the first team. Or is that left-back, where he put in a man-of-the-match display against Borussia Dortmund on Saturday? Seemingly, it doesn’t matter.

Converted from an attacking midfielder – 11 goals and 17 assists served him well over three seasons at U19 level – Henrichs retains a strong desire to get forward. Nevertheless, his tackling is strong and his speed enables him to intercept the ball more often than not.

Although still improving on other aspects of his game, Henrichs is beating team-mate Tin Jedvaj (himself an excellent player) into the first XI so far this season. Based on the acceleration of his development, a full season of first-team football will see him flourish and finish near the top of Germany’s current crop of young defensive talents. JH

They’re crying out for centre-backs in Spain, and one at the forefront of those emerging is Meré. He's being labelled the best talent to emerge from Sporting Gijon since David Villa, and that may well have substance.

Meré has had to grow up quickly at Sporting, and was thrown into the first team at a tender age. He made his debut at 18 and is now a regular at 19, but his composure is terrific – a perfect mix of Carles Puyol and Gerard Pique.

There’s also a rough exterior to his game too, shown in the unfussy undertakings of his defensive duties, but also a tranquil one in which he snuffs out danger in graceful fashion. It’s a perfect defensive cocktail, and Meré packs a punch. DC

Next: Who's the Premier League's early entry?

Horta was distraught when he was let go by Benfica’s youth system as a 15-year-old. Determined not to give up on his dream, he moved to Vitoria Setubal where he made steady progress, culminating in an impressive 2015/16 campaign in which he clocked up over 36 games for the top-flight club despite still being a teenager.

It was so impressive that Benfica came back for him in the summer, offering a five-year contract. Even so, it was a surprise to many that the younger of two footballing siblings (big bro plays for Braga) has been a regular starter at the centre of Benfica’s midfield.

Determined to make the most of his second chance at the Lisbon giants, Horta has not looked out of place, his dynamism and clever passing standing out. From a physical point of view he could do with filling out and he needs to work on his consistency, but the early signs are that Benfica did well to bring him back. TK

A Premier League winner's medal at 19 was fine reward for Gray last season, after his unselfish and bright substitute appearances helped Leicester wrap up their miracle title.

The Foxes picked him up for an absolute bargain £3.7m in January after activating his release clause at Birmingham, and so far the England U21 international has done nothing to suggest he won’t fulfil his exciting promise. Gray was restricted to only one Premier League start last term, but his role in helping his team see out matches was vital and valued by Claudio Ranieri.

Regular first-team starts still aren’t forthcoming – not easy when you’re trying to break into this established line-up – but they’ll come in good time. Appearances in the Champions League and a corking goal against Manchester United at Old Trafford are yet more signs that Gray needn’t worry about his long-term progression. JB

The Brazilian winger arrived at Bordeaux from Corinthians without much fanfare last January. Now, however, after time to settle and the influence of Jocelyn Gourvennec behind him, Ligue 1 fans are starting to see why he was so highly rated in Brazil.

Although Malcom has played mostly on the right for the French side, his excellent left foot is his greatest weapon. He’s quick to burst down the flank, and is good at keeping his head up to find a team-mate or popping up at the back post to get on the end of a chance. He showed Bordeaux fans on the opening day of the current season that he’s pretty capable from set-pieces too, curling a beautiful effort past Saint-Etienne's Stephane Ruffier – one of his three Ligue 1 goals so far this season.

Under new leadership this could be a vintage year for les Girondins, and you have to believe that Malcom is at the forefront of their resurgence. AG

The 19-year-old Jamaican took the Belgian league by storm at Genk in 2015/16, and was voted Young Player of the Season after scoring six goals and providing nine assists. Explosive on the wing, Bailey is lightning quick, full of tricks and imagination, and a real joy to watch on top form.

His first days in Europe were controversial to say the least, when he was apparently brought to Belgium illegally in 2013, but now – after a short spell in Slovakia with Trencin – everything is done by the book.

In fact, Bailey would now prefer to represent Belgium at senior level, having declined offers from Jamaica to call him up. "My ambitions are bigger than love for my country. Jamaica won't make me better, and scouts don't come to see their games. With Belgium I will develop. I want to play against the best," he declared, matter-of-factly. With that attitude, Genk might not be able to keep him for much longer. MY