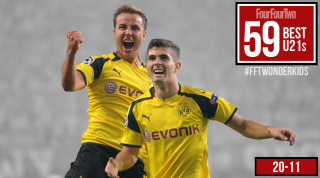 Croatian fans hope that the 19-year-old could become the new Luka Modric, and there are chances of that dream coming true. Coric is a very elegant midfielder with good close control and wonderful passing ability, which make comparisons to the Real Madrid star almost inevitable.

The youngster himself, however, aspires to play for Barcelona one day, even though he knows that the road will not necessarily be smooth. For now, he remains at Dinamo Zagreb after interest from Liverpool and Manchester City didn't result in specific negotiations. In the past he’s rejected some of Europe’s biggest clubs – indeed, at Bayern Munich there’s a grading system which determines the potential of young players, and Coric was the first in their history to fully finish all of the tasks and score maximum points. But he turned the Bavarians down.

Having made his debut for Dinamo Zagreb at the age of 17, Coric became a very valued member of their squad, though his slight built means that he is rarely able to play the full 90 minutes. He must be much stronger physically to become a complete player. It’s probably the reason he stayed on the bench in most Champions League matches last season. Coric made Croatia’s squad for Euro 2016 but didn't play a single minute, and will hope to gain much more experience this term. MY

Losing Dani Carvajal in the summer of 2014 was inevitable for Bayer Leverkusen, and his departure left big shoes to fill. At first, Roma's Tin Jedvaj didn’t look like a suitable replacement. His stunning goal against Werder Bremen might have got a few fans excited, but it quickly became clear that the Croatian was raw defensively.

Since then, though, the right-back’s talent has grown. His reading of the game has drastically improved and his tenacious work rate down the wing suits Leverkusen’s style of play. The battle against even younger team-mate Benjamin Henrichs – one Jedvaj is currently losing – will be great for B04, but pivotal for Jedvaj’s progression.

While most would admit that there is still plenty of work to be done – he even played at centre-back for three matches last season, in which Leverkusen conceded 10 goals – the Croatian is still just 20. The talent is undoubtedly there and the next few years will decide whether he steps up or drifts. JH

After arriving at Atletico Nacional as a 14-year-old, Marlo Moreno’s rise has been rapid. It climaxed in 2016 as he played a key role in his boyhood club triumphing in both the Superliga Colombiana and their sensational Copa Libertadores win.

Moreno’s stunning displays – he scored in the first three group games and added five more assists throughout the competition – convinced Manchester City to part with a potential bargain £5m for him, amid interest from clubs including Manchester United, Liverpool, Benfica and Sporting.

He can play anywhere along the frontline but prefers the No.9 role he relished in Colombia. “My game is based on speed and skill. I think one-on-one situations are my strong point,” he told Manchester City’s official site upon signing. At just 5ft 7in Moreno is something of a pocket rocket who packs blistering pace and dribbling skills. He also happens to have scored the quickest goal in Atletico Nacional’s history, after 30 seconds – and it came in last season’s league decider. Catch him if you can. DC

Towards the end of Werner’s spell at Stuttgart, it looked like his early promise had burned out – after all, he’d been playing in the first team since he was 17. His €10m move to RB Leipzig, however, has proved it was his surroundings that clouded his development.

The transfer was a brave but sensible decision, and the effects are already clear. Werner – part of Germany’s U17 team (with Max Meyer, Julian Brandt) that finished runners-up in the 2012 Euros when he was barely 16 – is showing much-improved movement, his scoring touch is back and he already looks like the player Stuttgart proudly promoted from their academy after hitting 31 goals (in 34 games) for the U17s and then 24 (in 25 games) for the U19s.

Werner’s experience isn’t the problem. He's made over 100 Bundesliga appearances – the youngest player ever to hit that tally in the league’s history. It was his composure in front of goal that was questioned. But with his confidence surging and his surroundings perfect, 2017 will be a big year for him. JH

Aged 19, the talented midfielder is way into his fourth season in Anderlecht’s starting line-up. Ever since making his debut in July 2013 and becoming the youngest-ever Belgian in the Champions League, Tielemans has remained a key player in midfield, and it is somewhat surprising that his club have managed to keep him so far despite interest from top clubs.

He could become a complete midfield star thanks to his versatility. Tielemans is two-footed, likes to dictate the tempo from behind, but at the same time packs a fine shot and is astute technically. His passing range can be exquisite, and his scoring record is good, with 22 goals in all competitions (five in 13 games so far this season).

Tielemans isn’t consistent enough yet, and hasn’t had a chance to prove himself for the national team because the Red Devils have such an incredible choice of superstars in midfield. But his time will come. MY

While the American media tend to hyperbolise, they weren’t exaggerating about how good Pulisic is. Direct and fearless, the teenager has benefited immensely after making his big move to Borussia Dortmund from Pennsylvania in summer 2015.

The speed at which the 18-year-old has developed, though, is testament to his quality. Aged only 17, two goals in two wins at the end of last season turned heads. At the very least it became clear that he wasn’t simply a marketing ploy (if there was any doubt in the first place, that is).

This season his trajectory has continued upwards. A standout display in a 6-0 home romp of Darmstadt was a turning point, but even more so his 17-minute cameo against Real Madrid in the Champions League. On the biggest stage in club football, Pulisic’s impact changed the game and showed he is where he’s supposed to be. America has a new star and he’s shining brightly in Dortmund. JH

When you’re 20 years old and battling Sergio Aguero for the spot in a one-striker system, it’s important you make your limited opportunities count. And quite how Iheanacho has done just that.

Manchester City’s Nigerian striker – quiet, humble and unspectacular in his play – doesn’t light up matches like Marcus Rashford or Anthony Martial. He doesn’t thrill fans with YouTube-worthy party tricks. But he scores goals, assists them too – and both very frequently.

Iheanacho has made 43 first-team appearances for City now, having joined them from the Taye Academy in 2014, but only 15 of those have been starts. Yet from a combined 1,576 minutes of football the 6ft 1in hitman has plundered 17 goals and added added eight more assists, making him directly involved in a Manchester City goal every 63 minutes. Even his goals alone practically average at one every 90 minutes. It takes a lot for a young player to make an impression at his club, but Iheanacho looks like he has so much to offer for years to come. JB

Brandt is set for his most exciting season yet. In the final 10 games of 2015/16 he scored in six consecutive games and notched five assists. His sensational salvo nearly landed him a spot in Germany’s Euro 2016 squad, but the 20-year-old still had a stunning summer winning silver for Germany’s Olympic team. Brandt played every minute, delivered nine assists and, even though in vain, he scored in the final's penalty shootout defeat to Brazil.

The 20-year-old’s talent has been undisputed ever since Leverkusen poached Brandt from Wolfsburg’s academy in January 2014 when his contract ran out. Now, with his wonderful control, strong finishing and mature playmaking, he is showing it on Germany’s biggest stage and beyond.

With over 100 appearances to his name for Leverkusen now, Brandt’s time to move on could be approaching as fast as a regular spot in the Germany squad. JH

Just when everyone at Rosario Central was speaking about the talented Franco Cervi (now at Benfica), 19-year-old Lo Celso was stepping up to send him to the bench. Less than a season later, PSG splashed €16m on the exquisite midfielder who will join the French side in January.

Comparisons with Angel Di Maria had been inevitable. “But I feel miles away from him – the only thing we have in common is that we grew up in Rosario, are left-footed and played and support the same club,” Lo Celso himself protested.

Actually, his game is completely different: a classic No.10 who enjoys pausing more than acceleration, and through-balls over one-on-ones. His repertoire is full of tricks: backheels, nutmegs and rabonas now fill his YouTube showreel. “My dream game would be one where I don’t miss a pass,” says the Andres Iniesta admirer, who represented Argentina at the Olympics in Rio and hopes to be called up for the national team soon enough. MM

Where Santos are concerned, saying that lightning doesn't strike twice in the same place just isn’t true. Just see Robinho and Diego in 2002. Or Neymar and Paulo Henrique Ganso a few years later. And now Gabigol. Santos’s Meninos da Vila factory never disappoints, and Gabriel Barbosa – as the new Inter Milan forward prefers to be called – is the newest of them to move abroad.

He’s got the same agent as Neymar, Kaka and Robinho in Wagner Ribeiro, so it’s no wonder that the summer transfer window was crazy for him. There were also offers from Leicester and Juventus, and a fight against Barcelona about a first-option clause.

In the end, Inter got the Brazil international for a shade under €30m. The 20-year-old has done well to get this far: he’s one of few successful cases of hyped academy youngsters who actually fulfil expectations in the professional ranks. The key for Gabriel now is not so much how he shows off that impressive technique of his, but to sustain the confidence that his football carries and has attracted so many teams to follow him. The rest will come. MA

Who are Football Manager 2017's 84 best wonderkids and why are they brilliant?