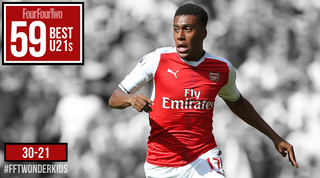 He may not have picked up as much game time as he’d have hoped at PSG, but there’s no doubt that Jean-Kevin Augustin is regarded very highly for both club and country.

The striker finished top scorer as France’s U19s won the European Championship in Germany this summer, equalling the tournament’s individual goal haul en route. His strike in the 4-0 final rout against Italy took his tally to six, the same amount as Alvaro Morata managed in 2011.

He may have only scored twice for PSG, but there’s much more to come from the young striker. Augustin has it all: he's quick and can drift out wide, but he has also developed his upper-body strength and control of the ball. With a deadly right foot to cap it off, at 19 he has all the tools to become a top-class forward. AG

One of Dortmund’s attacking summer signings, Mor was bought from Nordsjælland for his ability to outwit opponents in tight spaces. So far the Denmark-born Turkey international is certainly proving a bright spark when it comes to using his feet to find answers.

The pint-sized trickster has remarkable control, and uses it to duck and dive between opponents almost as if to deliberately embarrass them. Given that he so often takes on players, his success rate (currently 61% in 2016/17) is impressively high.

He can be guilty of trying to do too much, which sometimes means that his good work is wasted with a late or poor pass, but that will be ironed out under Thomas Tuchel at Dortmund. Seeing more of… er, Mor will be very exciting. JH

It’s not often that Ajax scout in South America (that’s usually PSV’s realm) – instead, the Amsterdam club tend to focus on the Scandinavian countries. But that changed with the recruitment of scout Henk Veldmate, and they picked up two bright young talents in Colombian duo Mateo Cassierra and Davinson Sanchez. While the former is still adapting to Dutch football, the latter has turned out to be arguably one of Ajax’s best acquisitions in recent memory.

Sanchez, who was scouted by Barcelona in May, is a monster of a defender. He frequently wins aerial duels, completes his tackles cleanly and recently even scored twice in an Eredivisie game against PEC Zwolle.

While his long passing from the back still has room to improve, Sanchez is already going a long way towards justifying why he was rated as one of the best young talents in the Copa Libertadores (which he won with Atletico Nacional earlier this year, playing every minute of every game). PR

Swiss star Embolo is all about the power. Power running, power shooting – it’s what he quickly made a name for at Basel. It’s why he averaged a goal every three games and an assist every four. It’s why he’s so hard to get off the ball when he’s in control and why he can be so formidable on the frontline.

It’s also why Schalke smashed their transfer record to bring him to the Bundesliga for €20m this summer. The Gelsenkirchen side needed pace, power and intelligence in their attack, and the 19-year-old gives them all of it. Embolo is exciting to watch when he holds the ball up and turns a defender in a strong move more becoming of an experienced player.

However, off the back of a quiet Euro 2016, he hasn't really hit the ground running at his new club. He’s not been helped by Schalke’s dreadful start, nor by struggling to find his best position just yet, but two goals against Borussia Monchengladbach last time may well light the touchpaper for a brighter short-term future. JH

Before their first match of the new season, Ajax released a small promo video looking back at the pain of losing the title on the last day of last season. Its pay-off declared a desire to give everything to ensure it didn’t happen this time around. The narration was done not by captain Davy Klaassen or even vice-captain Joel Veltman, however, but youngster Jairo Riedewald. “F*** doubt,” he proclaimed.

Riedewald follows an illustrious line of ball-playing, versatile defenders at Ajax that includes Ruud Krol, Jan Vertonghen and Toby Alderweireld. The 20-year-old’s passing is sublime, and his ability to spot and execute long, vertical passes is at a fantastic level.

Riedewald isn’t the tallest or strongest of defenders but has a keen ability to read attacks, which allows him to influence play either as a stopper or in midfield. The Dutchman has the potential to be a top-quality centre-back in the future, but needs to ensure that his versatility and ability to play in different positions at Ajax doesn’t hurt that. PR

If Chelsea are sensible, they’ll put Christensen straight into the starting XI the moment his loan comes to an end. The young Dane has grown into a fine player during his two-year spell at Gladbach, and it’s quickly become clear how smart the 20-year-old is.

Christensen is a ball-playing centre back who boasts a passing success rate (91.2%) that most midfielders would be happy with. After a shaky start, the Bundesliga has proved the perfect place for him to nurture his talent. He throws his body in the way when required, but usually positions himself well enough in the first place that ‘last ditch’ is rarely a term associated with him.

With Gladbach’s defensive ranks suffering from retirement, injuries and a loss of form, Christensen stepped up to become their man man at the back. A very bright future beckons for him – at Chelsea or elsewhere. JH

“He might not be a Brazilian, but we will make him a star," former Shakhtar Donetsk coach Mircea Lucescu once said about his talented Ukrainian prodigy. Kovalenko filled the void left by China-bound Alex Teixeira with ease at the beginning of 2016, and proved to be a real star. He is very comfortable on the ball and possesses great vision, but is also strong physically and enjoys a tackle.

Such qualities make the 20-year-old a very versatile player. He can play anywhere – as a holding midfielder, as a playmaker or on the flank. And he has a good eye for goal too – top scorer at the U20 World Cup in New Zealand in 2015, he has netted seven times for Shakhtar in 2016, including four strikes in European competitions.

Not for nothing was he included in Ukraine’s squad at Euro 2016, and left a positive impression in an otherwise very disappointing competition for his country. By the next tournament, Kovalenko could become the ultimate leader. MY

For years Portugal fans have despaired of finding a high-quality striker who can make it to the top of the international game. In 20-year-old Porto goal machine Andre Silva, at last there is hope.

A prolific scorer for the youth teams of club and country plus Porto’s B team, Silva wasted little time in setting his sights at senior level – two clinical finishes in last season’s Portuguese Cup final cemented his place in Porto’s starting XI. Despite his young age the Arsenal-linked hitman has been an ever-present for the Dragons this season and proved Porto’s most dangerous player, bagging six goals in 11 matches in 2016/17.

Strong, skilful, direct and blessed with a poacher’s instinct, it would be no surprise to see Silva maintain or better that goalscoring ratio as he acquires more experience. The Portugal No.9 shirt is surely his for years to come. TK

Few players make it all the way through an elite club’s youth system at all, let alone having started in it from the age of eight – but then Arsenal have always had high hopes for Iwobi.

Aged 20 he’s now a first-team regular for Arsene Wenger, who looks comfortable playing alongside his far more established team-mates. Meanwhile, unlike most of the young Gunners who’ve tried to graduate since Jack Wilshere did a decade ago, it looks like he’ll be in it for the long haul. Recent stories suggest Iwobi will be given another new contract just six months after signing his last – but really, it’s hardly surprising for a player who Wenger threw in for a first Champions League appearance in Barcelona last season.

“When you look at him at first there is nothing special there,” Wenger told Arsenal.com in September. “But when you look he is always connecting with others at a very high level, and a very high pace. That’s why I think he is improving. He still has a lot of work to do but he has something that is very important at the top level – speed and an understanding of the game.” JB

Few players have had to deal with the footballing upheaval that Tah has endured in his early years. It’s easy to forget that almost he’s three-quarters of the way to 100 professional league appearances, has played for two Bundesliga clubs, spent time on loan at Fortuna Dusseldorf and already been to a major championship.

His late call-up to Germany’s Euro 2016 squad as an injury replacement will have only aided his development (even though he didn’t make an appearance), and mean regular time in Jogi Löw's squad is more likely soon enough.

A strong, tall and physical defender, Tah is a superb tackler and interceptor. His play from the back will improve and he could do with scoring a few more goals, but he already looks the best central defender at Bayer Leverkusen. With Aleksandar Dragovic a €17m new signing and Omer Toprak captain, though, the 20-year-old’s toughest test could be yet to come. JH

Who are Football Manager 2017's 84 best wonderkids and why are they brilliant?