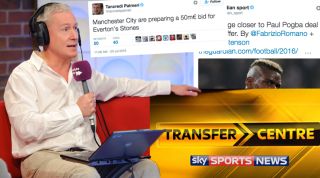 The source of all evil

There was a time when you could hang any transfer story upon the words of a source ‘close’ to the player or club, and it would go unquestioned. You were, after all, a member of Her Majesty’s Press and therefore your printed copy sacrosanct.

Sadly, in this internet age of social media cynics and Tweeting twits, you’re expected to reveal all about your contacts like some sort of magic circle snitch.

It’s far easier to be vague in your reports and simply write that a club are ‘thought to be interested' in a player and ‘expected' to place a bid, when of course what you nearly always mean is that an agent told you. If you really have no lead then you can almost will a story to happen by suggesting something will ‘surely’ or ‘inevitably’ happen. This may be nothing more than your opinion, but why should everyone else get to invent the stories and not you?

Dub be good to me

All stereotypes are on some level an exercise in laziness; they exist because they're crude shorthand and don't require any real thought. As such they are an incredibly useful tool in your arsenal, and far easier than reporting actual information. If a prospective target is a relative unknown, compare them to a high-profile name that everyone's heard of. It brings the story to life and gives your reader a point of reference.

For instance, if a player is tall and black, he's the 'new Vieira' (unless he’s a striker in which case you’ve got another Drogba on your hands); short and black and he's the 'next Makélélé' – it’s that easy! Any player from anywhere in the world with even a modicum of ball control is 'dubbed' the '[insert nationality] Messi', who was himself the last ‘new Maradona’ until he was afforded his own identity.

All news is breaking news

Behind all the yellow ticker giddiness, the actual logistics of negotiating a deal are of course deadly dull; a tediously predictable to-and-fro between administrative bods who still communicate using faxes. You’d be better off reporting on a stationary audit. So a great trick to add a little excitement to your story is to make everything seem imminent and breaking and urgent.

Describe transfers as being ‘on the verge’ of happening, or even better close to ‘collapse’, as if its a huge game of Jenga. You’ve also got to seem as if you are at the very centre of the action, and ideally as though you can tap the internal monologue. Refer to managers ‘mulling over’ a bid or ‘giving serious consideration’ to an offer. The player will obviously become ‘increasingly disillusioned’ by all the consideration and mulling.

They say never work with animals or children. Unless you’ve been properly CRB-checked the latter is definitely true, but the former should be the inspiration for a good chunk of your lexicon.

Animalise the situation whenever possible, making every story sound as though David Attenborough is crouched behind the shrubbery whispering about it to camera.

The buying club should always be ready to ‘pounce’, ‘capture’, ‘swoop’ or ‘snare’, as if ready to sink their teeth and talons into an innocent millionaire prey. Rival clubs are always ‘hovering’ like vultures should talks break down, and reluctant sellers have their players ‘locked’ into long-term deals like caged zoo creatures behind big golden £100k-a-week bars.

The language of love

Depending on your personal role-playing activities, this may overlap with the animal thing, but we all know that sex sells so why not paint your story as a whirlwind romance? Each stage of the proceedings can read like a chapter of a well-thumbed Mills and Boon page-turner. One club can ‘make the first move’ which will naturally be ‘rebuffed’ in a ‘vow’ not to sell, but not before the player’s ‘head is turned’, leaving him ‘tempted’.

The player will of course remain ‘coy’ at first, but if things don’t progress he’ll issue a ‘come-and-get-me’ plea to his suitor, which is the footballing equivalent of wearing a low-cut top and bending over the desk a lot. The brazen hussy may resort ‘slamming’ in a transfer request to ‘force through’ the deal. After all, who wants the interested party to ‘pull out’ just as things are reaching their ‘climax’?

It always helps to name drop

Whether you’re writing for a site with a paywall or even if you’re just looking for hits and retweets, it always pays to drop a few choice clangers to get noticed.

There’s no harm in dangling a few erroneous names in there to sex up the story. So if you know club X are interested in player Y, just throw in the far bigger name of club Z as ‘vying’ for his signature too.

Tottenham are perfect for this. They never actually buy anyone of note and are therefore always interested, like a bipolar lonely-heart with commitment issues. Then there’s Liverpool, whose supporters will believe any link no matter how unlikely because no player can resist the special aura of Anfield. In fact it serves to name check any club with enough money or prestige to liven things up – Arsenal, Manchester United, Chelsea, PSG, Real Madrid, Man City, Monaco – take your pick!

There is a light that never goes out

The worse thing you can possibly do is let a transfer story die. No deal is ever beyond revival so never pen a premature obituary. If a player signs a new contract, it’s simply a move to drive up the selling price. If an interested club turn their attention elsewhere and sign an alternative option, they can still ‘keep tabs’ on a previous target and ‘revive’ their interest in a future window.

Anything can be brought back to life with Sherlock-like impossibility. A club can always ‘revisit’ a target or ‘resurrect’ a deal. If you get it right you’ve got that holy grail of transfer rumours on your hands – a full-blown saga. It’s the gift that keeps giving and can sustain you for months if not years. In such cases you don’t want the deal to ever actually happen, just to be ‘ongoing’. Forever.