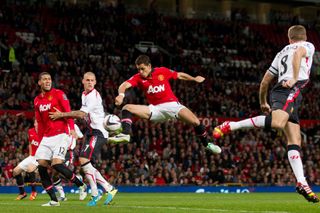 A campaign to ‘Free Shinji Kagawa’, relating to the Japan international's lack of first team opportunities at Manchester United, has been doing the rounds on social media sites for a few months now. His former Borussia Dortmund manager Jurgen Klopp inadvertently weighed in to the debate by conveying his dismay at the situation in an unrelated interview with The Guardian.

“Shinji Kagawa is one of the best players in the world and he now plays 20 minutes at Manchester United – on the left wing! My heart breaks. Really, I have tears in my eyes. Central midfield is Shinji's best role. He's an offensive midfielder with one of the best noses for goal I ever saw.” Kagawa is certainly not alone. A similar outcry would also be justified for Hernandez. Free Little Pea!

It is hard to imagine that Hernandez would be fourth choice striker at any other side in Europe. He is not stationed at a club with a pool of superior strikers, he instead appears to be a victim of circumstance.

Robin van Persie is the undisputed top dog and tends to lead the line alone, while Wayne Rooney can be stationed up top, tucked in behind or midfield if necessary. Danny Welbeck offers more height and can be utilised as either a physical foil up front or out wide at a push.

Chicharito is the type of out-and-out striker that would benefit from playing in tandem with a traditional centre forward, which is not going to happen at Old Trafford any time soon.

A relative unknown when he signed from Guadalajara in April 2010, Hernandez was signed for a mere £6.5m, before his price had chance to inflate at the forthcoming World Cup. After scoring in his first pre-season game for the club, Paul Scholes is believed to have remarked to Sir Alex Ferguson that he expected the new arrival to help himself to 25 goals.

He fell just shy of that, but 20 goals in 26 starts made him the first player since Ruud van Nistelrooy to reach that total in their debut season. Two-footed, quick and good in the air despite his diminutive stature, he saw off the challenge of Dimitar Berbatov and impressed with his attitude, application and perfect English.

In the following season, he failed to reach the heights of his dazzling debut campaign, but that was hardly surprising having played far more than expected for his new club. He had also represented Mexico in consecutive summer tournaments, the 2010 World Cup and 2011 Gold Cup, playing for a third straight season without a break.

He sustained a minor concussion in pre-season and would later damage ankle ligaments. Despite this, he has maintained an impressive return with 12 then 18 goals in 22 starts during each of the last two seasons.

Hernandez missed out on a portion of pre-season training this summer thanks to being on Confederation Cup duty, and has had to bide his time for an opportunity to impress new boss David Moyes.

He made a goal scoring return to the side in the League Cup win against Liverpool last month and retained his place in the subsequent league defeat against West Brom. He lasted for 57 minutes before being replaced by the fit again Van Persie, returning to the bench for the remainder of the game and probably the foreseeable future.

Linked with Real Madrid, Juventus and Atletico Madrid in the summer, his agent Eduardo Hernandez suggested his client was content in Manchester, claiming:  "He is very happy at Manchester United. Javier has been there three years and has won the league twice. Not many can say they have achieved that." Valencia were also keen, with an eye on replacing Spurs-bound Roberto Soldado, but Moyes turned down their loan approach.

Should he depart, it would be of no surprise if Hernandez were to thrive like Giuseppe Rossi, who also found opportunities at United few and far between before making a name for himself at Villarreal.

He may be willing and able to make an impact from the bench, but he deserves better than that and no one could blame him if he ran out of patience with a bit part role. United do not appear to appreciate what they have and may not truly appreciate his worth until it’s too late.