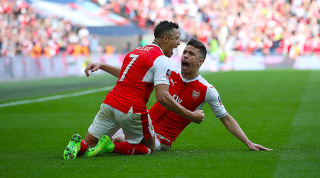 Both of the club’s stars will be allowed to leave north London for nothing at the end of the current campaign, with Chile international Sanchez tipped to join Manchester City and German World Cup winner Ozil a reported target of Manchester United.

But centre-back Gabriel, who joined Valencia last year after making 46 league outings for the north Londoners, is confident they won’t both jump ship.

Speaking exclusively in the February 2018 issue of FourFourTwo – a '90s special – he says: “The team would lose a lot if they left. I would bet at least one of them stays. Don’t ask me which one, though!"

The former Villarreal man featured in just half of Arsenal’s Premier League matches in 2016/17 before returning to Spain. Although injuries played their part, Gabriel feels he warranted more first-team opportunities in his two-and-a-half-year spell in England.

“The injuries definitely didn’t help, but I think I deserved more opportunities at Arsenal,” the Brazilian says.

“I felt down as the only way I played was if my team-mates were injured. I didn’t feel OK with that at all.

“I played one of my best games against City [in last season’s FA Cup semi-final] and was very happy, but then came the derby with Spurs and I gave away a penalty, and didn’t really play again. I wasn’t happy but I’m not mad. I’ll always be grateful to Arsenal.”

Read the full interview with Gabriel Paulista in the February 2018 issue of FourFourTwo magazine – a ’90s special in which we recall 90 things we loved about the decade and interview a host of icons including Fabrizio Ravanelli, Matt Le Tissier, Jorge Campos, Philippe Albert and Brian Laudrup. Plus, we look back on the Ajax side that took Europe by storm, dust off the VCR to review some football VHS ‘classics’, hear from Jimmy Glass about his famous last-gasp goal for Carlisle United and go One-on-One with former Norwich, Blackburn, Chelsea and Celtic striker Chris Sutton. Order a copy now, and then subscribe!