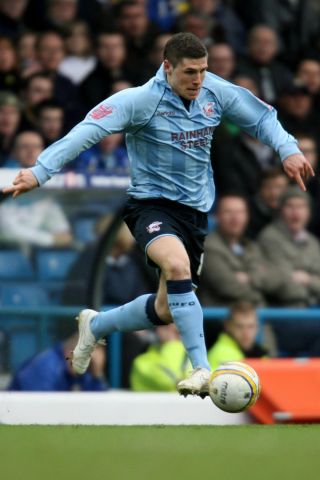 Nickname
You can’t do much with Gary so it’s always been ‘Hoops’.

Team supported as a boy
My cousin used to drag me down to White Hart Lane so I’ve been a Spurs fan for years. I played for them between the age of seven and 14 and used to love going to watch David Ginola. I was gutted when I was released but everything has worked out OK since. Maybe if I keep banging in the goals I’ll get to play for them again.

Strengths
It would have to be my finishing. I’m also pretty speedy.

Weaknesses
My heading needs some work – I can’t really remember scoring too many goals with it. I’m the kind of player who plays just off the striker, so the head never gets too much of a workout.

I play a bit like...
I’ve never really tried to emulate anyone or copy the way another player plays so my style is all my own!

Highlights
Signing for Scunthorpe. I had done a good job on loan at Hereford, and it was great to know that a manager had faith in me when Nigel Adkins handed me the No.10 shirt and told me to go out there and show what I could do. I hope I’m repaying some of that faith.

Lowlights
Southend took a punt on me after I’d scored a fair few goals for Grays Athletic in the Conference but then I was never given a real chance to cement a place in the first team. I was there for a couple of seasons but never really felt as though I was particularly wanted at Roots Hall.

Toughest opponent
I played against Darren Moore once and he was a big unit – you just couldn’t get round him. He has obviously played at the highest level and has got a massive amount of experience too. It was a real eye-opener, and he wasn’t afraid to give you a nudge either. It wasn’t a pleasant afternoon.

Best player played with
Michael Kightly when he was at Grays. It’s no surprise he has done so well at Wolves: he was quick. I mean, really quick. You could put the ball in the corner and you knew that he would be on the end of it.

Biggest influence
I owe a big debt of gratitude to two Sunday League coaches, Roger Miller and Chris Mitchell. One of them looked after me when I was playing for Spurs under-12s and they were both superb to work with. My dad has always been massively supportive too.

Biggest practical joker
You have to watch yourself when Izzy Iriekpen is around. He’s always up to no good. Mind you, there’s a lot of characters here; it’s probably why there’s such a great atmosphere around the place.

Wheels
I’m driving a Range Rover Sport at the moment.

Flicks
I went to see the new Bond film a few weeks ago. which was OK. Daniel Craig is a decent Bond but he’s no Sean Connery.

Chicks
What, anyone? That’s a big choice. I’ll play it safe and go with the missus – she’ll never forgive me if I don’t!

Holiday destination
I went to Dubai last summer and it was fantastic. The weather was fabulous, the service was great and everything was just top class.

If I hadn’t been a footballer...
I would have been a golfer, hopefully. I play off a handicap of 10 at the moment and the lads play near enough every week. Kenny Milne plays off 10 too and a couple of the other guys are off 14, so there are some decent players here.

If I could play alongside any player...
It would have to be Ronaldinho. He would do the trickery and I would do the finishing – dream ticket.

In five years' time...
My aim is to be playing in the Premier League and banging on the door of the senior England team.

From the January 2009 issue of FourFourTwo.