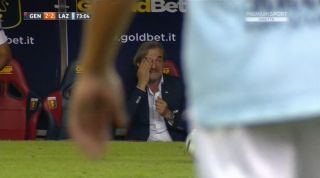 Genoa lost 3-2 to Lazio on Sunday evening, but the 16-year-old Pellegri stole attentions with two goals on his first Serie A appearance this season.

Pellegri equalled the record for Serie A's youngest-ever player when he debuted in December 2016, and scored his first goal for Genoa against Roma in April.

But here he went one better after coming off the bench in the 33rd minute, twice getting I Rossoblu back into the game before Ciro Immobile finally killed off comeback hopes by completing his own brace.

Pellegri's second started his father's waterworks, meanwhile. Marco Pellegri was hired as the team manager for this season, working alongside head coach and friend Ivan Juric, and he was clearly over the moon to see his son impress.

Pietro had some heartfelt words for his father post-match.

“It’s a dream come true that I’ve had since I was a child. It was an important evening for me and my father,” Pellegri told Mediaset Premium.

“I haven't left school, but this year I’ll have a private tutor to help me after my morning training sessions. My father has been following my career since I was little and it’s wonderful that he was so moved.

“He always took me to training, even in the cold and rain. He’s the one who keeps me on the right path in football, while my mother makes sure I study at school.”