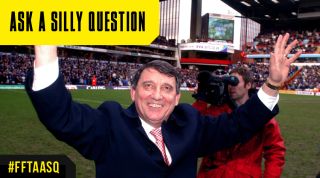 Morning, Graham. We’ve been interviewing a lot of Grahams lately. Why are there so many in football?

Because we’re great. And I’m the best Graham – you’ve got to be confident in yourself! You’re only a proper Graham, by the way, if you spell it with an ‘h’ – the English style. I’ve got nothing against the Scots, I love them, but a Scottish Graeme – like Souness – is not a proper Graham.

Which other ‘Grahams’ do you admire?

Graham Gooch – a superb cricketer. I’ve made my living out of football, but I enjoy cricket purely as a spectator.

Yes, I’d like to be considered rare and special. People say I’m a perfectionist, and we do need looking after. We create our own set of problems, Virgos, because we want everything to be right.

Barry Fry rates you as the second-best swearer in football after himself, but says: “He can’t swear now he’s a journalist”. Is this true?

[Chuckling] For the last six years I haven’t sworn very much. But I can’t see how anybody could possibly touch Barry at swearing – he’s the master.

Why do football folk cuss so much though, Graham? Surely it’s unnecessary.
Put it this way: if I’ve got Vinnie Jones in my side, and at half-time we’re 1-0 down and playing badly, do I say to Vinnie: “Excuse me Vincent, would you mind trying to get closer to their midfield, please?” Or do I say: “Vinnie, for f***’s sake, sort yourself f***ing out and get f***ing tighter”?

When did you last have a good old eff-up?

I don’t swear outside of football company, and I never swear in the company of ladies. But I had lunch with Steve Stride today, the former Villa club secretary, and we had a right good swear.

Do you have any weird dreams?

I dream a lot about Scunthorpe United – the only team I’ve supported. I’m the manager, we’re in the Premier League, and beating Barcelona in the Champions League final. It’s great.

Speaking of Lincolnshire, who is the greatest Fen-dweller of all time?
Maggie Thatcher from Grantham. When I was manager at Lincoln, she became leader of the Tories. I sent her a letter of congratulations, asking if she fancied coming to Sincil Bank. I got a note back from her servants, the tone of which was basically: “F*** off, you must be joking”.

What have you got on the wallpaper of your mobile phone?

I’ve just changed it from a big daffodil to a picture of a red and yellow bowl with grass coming out of it. Very pretty. I change it every couple of months, for a bit of variety.

Breaststroke… but not necessarily for swimming [chuckles].

You bad man. Cheers for chatting...