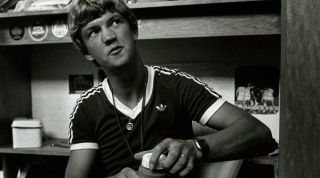 The suggestion is greeted with a chuckle from Adri van Tiggelen, a former club team-mate of Louis van Gaal's who later went on to help the Netherlands break its championship duck and re-write history at Euro '88.

FFT had asked him whether Van Gaal, the player, had any right to be mentioned in the same breath as Johan Cruyff, still widely acknowledged as the finest footballer produced by the country. His answer is unequivocal.

“He wasn’t as quick as Johan – maybe in his head but definitely not on the field,” he says. “No, there’s no comparison.”

Likening Cruyff and Van Gaal the managers, however, is inevitable given their association with both Ajax and Barcelona, and the overlap of philosophies – even though the duo have had their personal differences ("we have a bad chemistry," Cruyff once claimed).

But while history will judge Cruyff to be the country’s pre-eminent footballer it may also, in time, see the more pragmatic Van Gaal be recognised as the greatest coach ever produced by a country which, despite its size, exudes the kind of self-confidence embodied by the new man in the Old Trafford hot seat.

But while Cruyff’s managerial skills were honed by a career at the top of the game, Van Gaal’s were forged in the less-than-glamorous surroundings of the humble – if attractive – Het Kasteel Stadion, the home of Sparta Rotterdam.

Van Gaal captained the side through the most successful period in its history, including their qualification for the UEFA Cup on two occasions in 1985 and 1983.

While they were never likely to topple the established dominance of Ajax, PSV and Feyenoord, Holland’s traditional big three, Van Gaal’s side were still a threat in the Eredivisie. Then, the Manchester United manager was their driving force, despite lacking the quality enjoyed by the likes of Cruyff.

“Sparta Rotterdam aren’t a big club; they’re not a Feyenoord, or a PSV, or an Ajax,” says Van Tiggilen. “They’re a family club and that was a successful period, probably one of the best in the club’s history, and Louis played his part in that as captain.

“He was strong and very hard to knock off the ball, but he wasn’t a particularly technical player. He wasn’t quick; in fact he’s quicker now talking than he ever was as a player! Much quicker.”

Unsurprisingly, Van Gaal was no shrinking violet in the land of the tulip. In his new book on the former Dutch boss, Maarten Meijer reveals the challenge that he posed to then-Sparta manager, Welshman Barry Hughes.

“He gave the impression he had personally invented the game of football,” says Hughes. “On the pitch he performed well but as a person he was a hopeless case. Things did get better and he was my team captain in the last year, but he will never be my friend.”

That Hughes made Van Gaal skipper is, though, an acknowledgement of the leadership skills that were apparent to all those involved with the club, including Van Tiggelen.

“He was the captain and he had the team behind him, but he wasn’t the big player in it,” he says. “He was the man who would be talking to everybody on the field. He’s a man that has always done a lot of talking.

“He played in the centre; that was the best position, he could see a pass. It was also the best position for him to captain the side, to let the team know what he thought. He was a good passer of a football, he knew where it needed to go.”

'They all hate me'

In keeping with his skills as a player, Van Gaal has never lacked direction. Another team-mate at Sparta, former Aberdeen manager Jimmy Calderwood, tells FFT that the 63-year-old's on-pitch demeanour singled him out as a future coach.

“He would talk throughout the game, he had great vision as a footballer and I had no doubt that he could transfer those skills to coaching,” says Calderwood. “He would notice things, little things, that no one else would ever pick up on, and use them or pass them on in training. He had an eye for detail.”

The confrontational approach that riled his manager at Sparta has also mellowed slightly, with Van Gaal ultimately realising that an in-your-face approach only gets you so far as a manager.

“I came to spend a few days with him in Munich,” says Calderwood. “He was on the training ground, and Louis came and sat with me in the dugout right beside the pitch. I said, 'Louis, what’s happening? Why aren’t you out there?’

“He turned to me and said ‘Jimmy, after a game I don’t train with them, I just sit on the side. They all hate me.’ He’s just so determined that everything has to be perfect. He was exactly the same as a player.”

Those who have worked with him at Ajax, Barcelona, Bayern Munich and with the Dutch national team have benefited from that approach, and there’s little doubt that Van Gaal remains one of the most perceptive coaches in the modern game.

Now, though, perhaps he faces his biggest challenge of all – restoring confidence at a club whose 20-year dominance of the English game has come to an abrupt end.

“Now he’s at Manchester I think he’ll be fine, he just needs some time,” says Van Tiggelen. “He needs new players, perhaps two or three, because the defence is not good. Then I think he’ll be OK. But he needs that time.”

And if he needs a break from the stresses and strains of life in the Old Trafford goldfish bowl, he can always head back to Rotterdam.

“He’s still loved there,” says Van Tiggelen. “He was even forgiven for coming from Amsterdam; he was a popular figure. Sparta is a friendly team with friendly people and they like him. Every time he comes back he’s greeted like an old friend.”