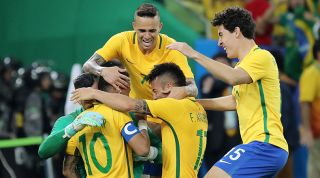 When Dunga and his players travelled to Santiago to face Chile at the beginning of October 2015, it didn’t feel like an exciting new era for Brazil. According to local media, it would be the toughest World Cup qualifiers ever and the fight for a place would go until the last round.

Brazil’s most popular commentator Galvao Bueno repeated this so many times that most fans started to believe that their side could indeed be absent from the tournament for the first time in history.

That 7-1 obviously had some influence on this. Being sent back home after a group stage disaster at the 2016 Copa America didn’t help much either.

How, then, can this be the same side that reclaimed top spot in the FIFA ranking for the first time since 2010 last Thursday, after winning eight games straight, scoring 24 goals, conceding only two and - most importantly - rediscovering their mojo?

In what was supposed to be the toughest World Cup qualifiers ever, Brazil have coasted to Russia 2018 with four games to spare after a 3-0 home win over Paraguay. Don't take it the wrong way – and it sounds less extreme if you know a bit more about current Brazilian politics – but in a recent poll, 15% of people said they would vote for new coach Tite as president.

If he has done all this after 20 training sessions with Neymar, Philippe Coutinho and his fellow colleagues, then what could he do with the country? We might never know, but we can explain how Brazil became feared once again.

Neymar? Forget about him for a moment. Tite had always dreamed about working alongside Coutinho. He has carried such thoughts since watching him for the first time in a 2010 friendly between Brazil and Iran in Abu Dhabi. He coached club side Al Wahda back then and left the stadium impressed with what he'd seen.

“I attended that game and I recall repeating to myself how awesome he is,” the 55-year-old coach revealed. It was no surprise that Tite tried to sign Coutinho on loan when the manager returned to take charge of Corinthians that same season.

Inter didn’t agree to it – but the duo were meant to work together. The Liverpool attacker wasn’t a starter in Tite’s first two matches, coming on as a substitute for Chelsea’s Willian in both of them. However, he did so well that he's retained his place since then, netting three goals. He is now fully adapted to the right flank.

Jesus and the fish

Then there's Gabriel Jesus. Don't be mistaken, though: he and the fans haven't always got along as well as they do now – the 20-year-old striker was even booed by a crowd of over 50,000 as he was subbed for Rafinha Alcantara against Iraq in the 2016 Olympics. Nevertheless, Tite still bet on him to be the striker Brazil had missed since Adriano – and he was right.

Jesus couldn't have given a better answer to him: five goals in his six first matches. Manchester City's boss Pep Guardiola has had some participation in this.

When they met for the first time, Guardiola asked the player if he liked fish. The new signing replied that he didn't. Guardiola said it would be a nice thing for him. Jesus has been eating it since. Fish may not be sole-ly responsible (sorry) for the form he was showing before his recent injury, but the youngster certainly seems to be enjoying life under both Guardiola and his international manager.

Forget about the past

When Tite got the job in June 2016, he started calling the players and sent a message: "I don't want to know about problems of the past, it's a new era now," he declared. It's how he brought Thiago Silva and Marcelo back into the team, and the atmosphere is now totally different from the one the player had with Tito’s predecessor, Dunga.

There was a guideline for the players back then that forced them to sing the anthem, not leave the dinner table before captain Neymar, and pay for extra expenses during trips. All this has changed – but it's not the only thing.

Take a look at Brazil's midfield. Real Madrid's Casemiro plays in front of the defence and has two players from the Chinese Super League by his side: Beijing Guoan's Renato Augusto and Guangzhou Evergrande's Paulinho. As strange as it sounds for Brazil to be calling up players from China, both have been excellent for the five-time world champions in qualifying.

Former Tottenham midfielder Paulinho even recorded an impressive hat-trick in the 4-1 away win over Uruguay in Montevideo in March, and doesn't remotely resemble the same player that Tottenham paid £17 million for and who never settled at White Hart Lane. Back then, he texted a close friend asking how he quickly he could get away, using fairly industrial language. He's definitely a player who doesn't miss the Premier League.

We are coming for you, Europe

Ronaldinho – How the godfather of flair changed football

Quiz! How many of the Premier League's 42 Brazilian goalscorers can you name?

When was the last time Brazil faced a European side, you ask? Don't blame your memory, it's been a while – their 3-1 win against France in Paris in March 2015, to be precise. Brazil have faced 28 different opponents since then: 21 of them from South America and the other seven from North and Central America.

The coaching team is aware of this and even asked for a game against Germany in 2016, but it wasn't possible to find a date.

Now the pair are set to play each other for the first time since the 7-1 semi-final, in March 2018, just a few months before the World Cup. Perhaps that demon-facing game will show us just how far Tite has hauled this side from the depths they plummeted to before his reign.