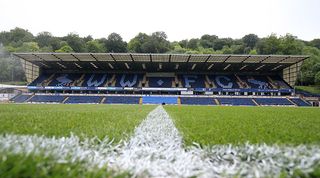 It was at secondary school where I first encountered any significant dislike of football – not surprising at a rugby-playing grammar that lists multiple England internationals among its alumni, but a rather alien concept to me nonetheless.

My 12-year-old self’s overt obsession with the round-ball game didn’t go down too well with everyone, and one particularly confrontational classmate’s question has stuck with me. “Does your life revolve around football?”

I don’t recall my response, but he could ask me again now – and I wouldn’t feel sad in answering with a firm “yes”, either.

Football – or more specifically, Wycombe Wanderers – serves as an immovable cornerstone of my life today. That hasn’t constantly been the case, but it took struggling with my mental health for me to see that my love had diminished.

I’ve been going to watch Wycombe since I was eight, and had a season ticket at Adams Park for several years, but I stopped being a regular sometime during the 2009/10 campaign. For a 15-year-old back then, following your local team wasn’t exactly cool, and my baseless fondness for Liverpool – which I construed as ‘support’ in my complicated, developing mind – took precedence.

Sure, I continued to attend occasional Wanderers games, but I no longer had a seat to call my own. Do I regret it? Looking back now and after what I’ve been through, definitely.

I was working Saturdays come the start of the 2012/13 season, and that strange, self-imposed exile became justified in a way. By the time I’d escaped the weekend retail slog, the Chairboys had miraculously dodged relegation to the National League and were well on their way to a Wembley play-off final.

My interest had been rekindled somewhat during what turned out to be a directionless double gap year – albeit one spent on British shores – but my inability to attend games meant I’d missed out on what would prove to be the most dramatic period in my club’s recent history.

And then it hit me

In November 2016, the triple whammy of anxiety, depression and OCD took their seemingly inescapable stranglehold on me. At the time, it felt so sudden.

I was nearing the end of a degree which I didn’t enjoy, I was spending too much time around a live music scene that I didn’t feel a part of, and I’d generally lost sense of the things that used to bring me pleasure. My life wasn’t revolving around football – it hadn’t been for too long – and its orbit had been disrupted.

A return to matchdays wasn’t an immediate self-cure to my crippling ailments, but it’s proved to be just what the doctor should have ordered. One psychotherapist did recognise therapeutic benefits from the adrenaline rush of being in the stands – yes, one can experience such a thing in Leagues One and Two – but medication and meditation were the recommended remedies.

Not for me, Clive.

Properly re-immersing myself in the matchday experience has done more for my mental wellbeing than any prescription or introspection managed to. In a way, I’ve come to gain a new appreciation of what it is to love football.

Rather than being a cause of stress and annoyance, it’s become a source of solace for me; an overwhelmingly positive constant in my life. At the best of times it’s a euphoric enhancement of my week; at the worst, a reliable shelter from the storm. I’m doing pretty well right now, but the reassurance of guaranteed comfort the next time I’m not is invaluable.

Wycombe are currently embroiled in the mother of all relegation scraps at the foot of League One. While others around me may be throwing their blue-tinted glasses to the ground in frustration, I’ve found that my new, more philosophical approach to the game has ensured I keep my head.

COLUMN Marvin Sordell: It’s time to tell you about my depression

Last Tuesday’s home match against Charlton was as much a necessary night to myself as it was another hard-to-take narrow loss; Saturday’s trip to Southend was as much a positively distracting day out than it was a crunch six-pointer in the fight for survival. It helps to have a sense of perspective. It also helps when you win 2-0.

As a youngster, I tended to let my team’s fortunes define my mood, for better or for worse. I’m not going to pretend that’s not still true to a certain extent, but generally the ups and downs of football no longer correlate with those of my mental state.

Instead, football’s very presence in my life has come to play a huge part in keeping me from returning to the darkest days – and for that I’m grateful.