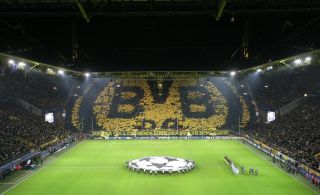 My first sight of the Borussia Dortmund squad came across a dusty car park in La Manga, Spain. As we walked towards the lush training pitches, I said to one of FourFourTwo's German contingent, 'Is this the youth team?' He chuckled before saying, 'No, that's the first team.'

As we got closer, the more familiar faces started to come into focus. Christ, there's Mario Gotze, he's tiny! There's Marco Reus, Robert Lewandowski, flipping hell. They're all so young!

What followed was a masterclass in intensive training. A quick, pressing drill was marshalled by the club's irrepressible coach, Jurgen Klopp. As the ball fizzed around the pitch, the booming Klopp dished out praise loudly ('GUUUUUUUUUD, MARCO GUUUUUUUUUUUUD!') and corrected quietly while striding around the perfect playing surface.

The purpose of the morning's drill was to retain possession while attacking at high speed, but if possession was lost the attacking team had to pounce on the poor sod who'd had the audacity to win the ball and snatch it back. The intensity was high and at one point the tackles were flying in. It was then I realised that none of them were wearing shinpads. This lot were full on.

I had arrived in La Manga the night before this training session. My absolutely rammed EasyJet flight had got me into Alicante airport around 10.30pm and my off-off-off airport car rental place (Dickmanns Rent-a-car, for those of you interested) furnished me with a sat-nav-free motor to feel my way through the 90-minute pitch-black drive to La Manga - it's dead glamorous this magazine lark.

By the time I turned up at the massive urbanisation known as La Manga, all the players were tucked up in bed and a few members of the press team and backroom staff were setting about the wine list in the hotel bar.

At this point, it's probably worth pointing out that the whole reason for my trip was to oversee the photoshoot with four Dortmund players and their coach for the cover of FourFourTwo's March 2013 issue.

The magazine had never given the cover to a German club side before and I was very keen to make sure we captured the vibe of this young, happening setup who had marauded through the Champions League group stages with levels of glee usually reserved for four-year-olds let loose on a pick'n'mix.

We'd spent a month in and around the club, in Dortmund as well as at La Manga, and we'd uncovered a fascinating story. But we know that when it comes to photography, it can be tricky to get footballers to do much of anything other than fold their arms and look bored, so I wanted to be on hand to pull faces, shout, scream, set myself on fire - pretty much anything that would make the buggers sit up and take notice.

So, back in the hotel bar at midnight, it was with undisguised dismay I received the news from the club's press officer that the next day's shoot had moved from the rather cryptic 'afternoon' slot in the team's itinerary to after dinner at 8.15pm. My you-must-be-having-a-laugh-mate-that's-non-refundable return ticket on Easyjet was booked for 9.45 - and Alicante's a long way from effing La Manga!

The next morning, once I'd watched the team training, I set about tearing up my well-laid travel plans and putting my credit card to good use to extend my stay for the shoot. About £500 later, I was sorted and set for the evening's photographic boogie.

For a couple of hours I became a photographer's assistant as he set up his makeshift studio in a hotel meeting room. At first, this involved trying to find a working electric socket after the initial ones we used blew up under the strain of some rather epic flashguns.

That minor crisis averted, I became the stand-in for Gotze, Reus, Klopp & Co. as the photographer snapped test shot after test shot to make sure he got the lighting just right.

We decided to shoot everyone from two angles: head on and from above. The 'above' shot involved the use of a slightly wobbly stepladder, which in itself wasn't a major concern. What was more worrying was the kit the photographer had brought to shoot with: a Hasselblad camera. Roughly £20,000 of kit, up a rickety stepladder. The snapper also took it upon himself to use an ironing board as a temporary workspace for his laptop and camera - sweaty times.

Access to players is something that FourFourTwo enjoys with regularity, but often that access is brief, particularly when there are four players and their coach all on site at the same time. We were pretty sure we'd get about 20 minutes in total to get all the shots we needed to execute the cover and also the feature's opening spread. Ambitious? Well, we like a challenge here at FourFourTwo.

In brilliantly German fashion, the players and Klopp started to arrive for their shoot not just on time but early. From here on in, I must have taken on the appearance of a confused tourist as the next half-hour or so was conducted entirely in quickfire German - my only input coming via the photographer who became a de facto interpreter as well as hot-shot lensman.

As the players had to change into their freshly pressed kits, the already-tracksuited Klopp took to the white backdrop to be shot first. What followed was a complete romp. He posed, aped, pulled faces, jumped in the air, shouted and generally had a good time. I'm pretty confident when I say, there is no way in hell you'd catch a Premier League manager doing this - and, quite frankly, that's a goddamn shame.

Watching Klopp in front of the camera reminded me of a quote from my favourite film, This Is Spinal Tap. When keyboardist Viv Savage is asked for the motto he lives life by, he replies 'Have a good time, all of the time.' That's what being around Dortmund feels like. You get the feeling that it's mostly down to Klopp.

For his final shot we asked Klopp to point and shout like he was on the training pitch. He was having trouble finding a focal point to aim at with both index finger and shout, so I went and stood in the line of sight where we wanted him looking. 'LAUF!' he boomed at me. It was so loud that I pretty sure someone in the hotel's reception started dialling the local police. 'LAUF!' he shouted again.

Later I discovered that 'lauf' means 'run' - how appropriate that the coach of a team who had steamrollered Europe's elite with incessant running should be shouting that. I didn't run, by the way, but I did crack up at the absurdity of the situation. Brilliant, but absurd nevertheless.

As Klopp's stint in front of the camera came to an end, the players filed out all changed and looking the part. There were some exchanges in German and it was clear that Marco Reus was either annoyed or pretending to be annoyed.

It transpired he wasn't entirely in the loop as to the 'fun' vibe we were after in the shoot, but he dutifully stepped up with buddy Mario Gotze and within minutes they were giving us exactly what we were after. The same went for Sebastien Kehl and Robert Lewandowski.

The whole mood of the shoot was helped by Klopp, who chose to stick around and take the mick out of his players. Some snippets of translation came through. When the photographer told the players to turn their chest to the camera, Klopp was making wisecracks about them showing more breast - and you thought it was only English humour that did silly smut. The players responded with sniggers, then laughs and before we knew it they were throwing shapes and having almost as good a time as their manager had had in front of the camera.

With the session done (I believe we managed the whole thing in less than 25 minutes in the end - virtual high-five!) I shook hands with each of the players and thanked them for their time. I actually mistimed my handshake with Gotze who dropped his shorts just as I walked over to him with hand outstretched. Basically, I wound up shaking the hand of a £40 million player while he had his shorts round his ankles. Weird things happen in this job sometimes.

Personally, I'm really pleased with how the whole picture and feature turned out, but ultimately, it doesn't really matter what I think - it's up you. We all hope you enjoy it - Dortmund certainly did.