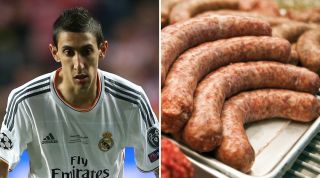 Ion Radu transferred from Jiul Petrosani to Valcea in 1998. The club’s president explained: "We will sell the meat, then pay all the other players’ salaries."

3. A player’s weight in fresh shrimp

Kenneth Kristensen transferred from Vindbjart to Floey in 2002. Kristensen was said to have weighed in at around the 75 kg (165 lb) mark.

Zat Knight transferred from Rushall Olympic to Fulham in 1999. The tracksuits were more a gesture of goodwill than a transfer fee.

Ernie Blenkinsop transferred from Cudworth to Blenkinsop in 1921. Said barrel was said to contain 45 litres (80 pints) of unspecified brown booze.

7. A set of football kit

Liviu Baicea transferred from Jiul Petrosani to UT Arad in 1998. Having swapped one player for meat (see No. 1), Jiul Petrosani’s president opted for a slightly more appropriate trade here.

9. A freezer full of ice cream

Marius Cioara transferred from UT Arad to Regal Hornia in 2006. Ciora retired a day after this deal, claiming ‘it was a huge insult’, leaving Regal Hornia to demand the sausages back.

Taken from Top 10 For Men by Nick Harper, published by Octopus and out now