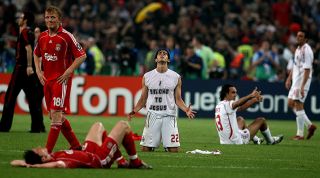 This feature originally appeared in the December 2015 issue of FourFourTwo. Subscribe today to get five issues for just £5!

I didn’t come on, but I was so proud to be part of the squad at a World Cup final. I was nervous because we were playing Germany, one of football’s most difficult teams, but when Ronaldo scored twice in the second half I knew we’d win. With five minutes left, Felipao [Brazil coach Luiz Felipe Scolari] looked at me on the bench and said: ‘Go kid, now’s your time.’

I didn’t even warm up, I went straight to the touchline. Unfortunately I ran out of time, but I was right by the referee as he blew the whistle. It was one of the best feelings I’ve ever had. I was a 20-year-old world champion with the Seleção. Sensational.

The 2005 Champions League Final was a historic, exciting game. We had one of the best backlines in history: Dida, Cafu, [Jaap] Stam, [Alessandro] Nesta and [Paolo] Maldini. So when Hernan Crespo scored from my pass to make it 3-0, we were confident.

I’m still not sure what happened as Liverpool pegged us back in six minutes. It felt so bad when Jerzy Dudek saved Andriy Shevchenko’s penalty in the shootout. That day I learned a valuable lesson: football is a game you can never take for granted. I’ve won a lot of other games and titles, easing the pain of that defeat, but it’s still an important game in my life.

I’ve chosen two games I lost because I learned a lot from them. That Brazil team was unbelievable, with Cafu, Lucio, Roberto Carlos, Ronaldo and Ronaldinho, who had just won the Champions League with Barcelona.

But Zinedine Zidane was at his best that day as France reached the semi-finals. One lapse of concentration and our dream of retaining the World Cup was gone, but it made me stronger and led to all the following season’s accomplishments.

The rematch. We had such motivation to put things right, to prevent 2005 from happening again. At the end of the first half, Pippo Inzaghi’s shoulder deflected Andrea Pirlo’s free-kick into the net. He added a second in the 82nd minute, going around Pepe Reina from my pass.

But when Dirk Kuyt pulled one back [in the last minute], we started asking ourselves those questions again: ‘Is it happening again? Are we going to lose?’ You could feel the tension in the stands, but this time we gave our fans the win we owed them. It felt wonderful. I was in my prime; 2007 was the most important year of my career.

The scoreline makes it sound like an easy game, but the Club World Cup final was very competitive. At 2-1, I was blessed with a goal in the 61st minute. I received the ball on the halfway line and ran forward, dribbling past Jonathan Maidana before rolling the ball between the keeper’s legs to score.

I revealed an undershirt with the message ‘I belong to Jesus’, something people relate to everywhere I go. At the final whistle we celebrated like kids. And when I thought things couldn’t get any better, I was named man of the match.