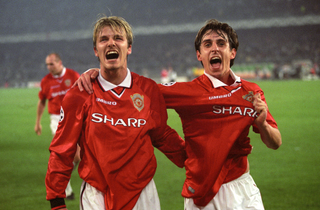 There hasn’t been a huge amount to shout about on the Champions League front since Sir Alex Ferguson’s departure (although there was at least that Europa League win in 2017). However, in the interests of A) not completely ignoring the last six years and B) throwing Moyesy a bone, we’ve gone for this group-stage demolition of Bayer Leverkusen.

This kind of European thrashing used to be much more frequent (poor Brondby), but this result has the distinction of being United’s biggest ever away win in the Champions League. Wayne Rooney had a hand in four of the goals, as Antonio Valencia, Jonny Evans, Chris Smalling and Nani got on the scoresheet to send United into the knockout stages with a game to spare.

This has to be on the list because of the way it finished, but Manchester United really didn’t play well in this game at all. They were hampered by suspensions to Paul Scholes and Roy Keane of course, and knackered after a gruelling fight for the Premier League title which went right down to the last day.

A midfield of Jesper Blomqvist, Nicky Butt, David Beckham and Ryan Giggs wasn’t Ferguson’s ideal choice – and United struggled to break down Bayern Munich after falling behind to Mario Basler’s early, low free-kick. The sides had drawn 3-3 and 2-2 in the group stage, though, so perhaps more goals were inevitable – although there were definitely hearts in mouths when Carsten Jancker sent an overhead kick looping onto the bar. In the end... well, we all know what happened in the end.

Paul Scholes had missed United’s 1999 Champions League Final through suspension, but it was his stunning goal which ensured they reached their next one. This was a very different United side, built on the counter-attacking trio of Cristiano Ronaldo, Wayne Rooney and Carlos Tevez. It was set up to stop a Barcelona team which would - with a few minor tweaks - become one of the most successful club sides in history.

United had secured a 0-0 draw at the Camp Nou in the first leg – although could have had more, as Ronaldo missed a penalty in the third minute. In the 14th minute of the second leg, Scholes collected a loose pass and smashed a swerving, unstoppable shot into the top corner.

As a standalone game, this would be higher up the list – a stunning home win against one of the most star-studded sides in history. This was a dramatic, magical evening of attacking football – two giants trading blows.

A brace from substitute David Beckham, plus a goal from Ruud van Nistelrooy and an own goal from Ivan Helguera, gave United hope. But Madrid had won the first leg 3-1, so the Reds needed a wider win and were undone by the brilliance of Original Ronaldo, who scored a magnificent hat-trick. It was this game which led to Alex Ferguson reshaping his team into a more solid defensive unit, and laid the foundations for their 2008 Champions League victory.

MARCUS RASHFORD "Real Madrid at Old Trafford? That was the first game I went to!"

The ban on English clubs competing in European competitions after Heysel had taken its toll, with many of Britain’s best players opting to ply their trade elsewhere. That included Mark Hughes, who’d spent time with Terry Venables at Barcelona, and faced his former side in the European Cup Winners’ Cup Final in the first season back at Manchester United.

The striker opened the scoring at Rotterdam’s De Kuip stadium after 67 minutes - officially, at least. There’s some dispute as to whether Steve Bruce’s header had already crossed the line before Hughes snatched in, playground-style, to steal it. There was no doubt about the second goal seven minutes later, as Hughes rounded goalkeeper Carles Busquets (who’d enthusiastically thrown himself to the ground - like father like son) and fired in from a tight angle.

Ronald Koeman pulled one back for Barça with a long-range free-kick, and the Catalan side had a goal disallowed and a shot cleared off the line late on. However, United held on to claim their first European trophy since the 1960s.

Portuguese side Porto had taken 16 points from a possible 18 in the group stages and were among the favourites for the competition, but were demolished by an Eric Cantona-inspired United in the quarter-finals.

David Beckham and Ryan Giggs played wide, with Cantona, Andy Cole and Ole Gunnar Solskjaer all in the starting line-up. That attacking intent was rewarded. First, David May bundled in from close range, before Cantona seized on a defensive mistake to fire past keeper Hilario and make it 2-0.

In the second half, Cantona started a counter-attack with a delicious outside-of-the-foot pass down the line for Cole, who fed Giggs to fire in. Cantona then released Cole with a beautifully weighted pass to add a fourth. Although United fell to Borussia Dortmund in the next round, it was a performance that set the tone for many European nights to come.

David Beckham returned to Old Trafford as an opposition player, but was powerless to stop his Milan side – also featuring Andrea Pirlo and Ronaldinho – being swept away by an imperious United in this last-16 clash.

Ferguson’s men had won the first leg 3-2 in San Siro, and took control here thanks to another masterclass from Wayne Rooney, who’d scored twice in the first leg. He headed in a trademark cross from deep by Gary Neville, then poked home after great work down the left-hand side by Nani. Park added a third, and Darren Fletcher a fourth to take United into the next round.

Alex Ferguson has said that this was United’s best performance in Europe under his management, and it’s easy to see why. Roma had won the first leg 2-1, but were absolutely demolished in the second leg, in one of United’s most memorable displays.

The home side were 4-0 up by half-time. Michael Carrick had opened the scoring after 11 minutes with a no-backlift curler of which Ronaldinho would have been proud, before Alan Smith, Wayne Rooney and Cristiano Ronaldo joined the fun.

The Portuguese winger was a constant menace, and could have scored several more. In the end it was just two - a second shortly after half-time, before another stunning long-range strike from Carrick made it 6-0. Daniele De Rossi - beyond furious by this point - pulled one back with a fine volley, before Patrice Evra’s deflected strike made it seven. A dazzling win.

Ole Gunnar Solskjaer had done very little wrong during his tenure as United boss at this point, but a 2-0 home defeat by PSG in the first leg of their last-16 clash was a rare blot on the Norwegian's copybook. In fairness to Solskjaer, the French side's comfortable victory at Old Trafford evidenced a gulf in class which has been steadily widening over the last few years.

Or so it seemed. Few gave United a chance in the return fixture at the Parc des Princes, but the ever-cheery Solskjaer had a twinkle in his eye before the game. "I don’t want to call it strange, but last year Juventus lost 3-0 at home against Real Madrid and suddenly they were 3-0 up after 90 minutes against Madrid away," he said, before concluding more ominously: "The year before that, PSG against Barcelona."

And so things came to pass on a memorable night in Paris. No side – in 106 previous matches – had ever lost 2-0 at home in the first leg of European competition and gone on to win the tie. But two first-half goals from Romelu Lukaku and Marcus Rashford's stoppage-time penalty - awarded by the VAR for handball in controversial circumstances - completed one of the most remarkable comebacks in the club's history. "We can go all the way [now]," Solskjaer grinned post-match.

They were knocked out comfortably by Barcelona in the next round, but the PSG game will live long in the memory.


Manchester United had escaped from Old Trafford with a 1-1 draw thanks to a late Ryan Giggs goal, but were 2-0 down inside 11 minutes in the second leg of the semi-final in Turin. Their treble dreams seemed to be in tatters.

Pippo Inzaghi had scrambled home from a Zinedine Zidane cross for Juventus, then benefited from a lucky deflection off Jaap Stam as the ball looped over Peter Schmeichel and into the far corner. But then came the fightback. First, Roy Keane rising above Zidane to flick home a header from a corner. “A captain’s goal,” is how Clive Tyldesley described it (his shrill tones always seemed to add an extra layer of drama to these occasions).

From then on, Andy Cole and Dwight Yorke took over. Their seemingly telepathic relationship had already been displayed earlier in the competition against Barcelona, and they were at it again here.

After 34 minutes, Cole crossed for Yorke to head home an equaliser which put United in the final on away goals. United hit both posts as they hit the Italian side on the break, before Cole finally sealed the tie - tapping in from a tight angle after Yorke had rounded the keeper and been brought down. It was an incredible comeback – and there was another one still to come.