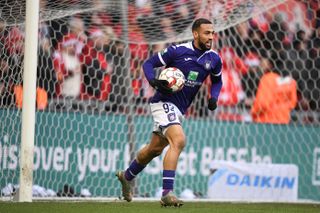 The striker registered double digit goal tallies in each of his final two seasons at Elland Road and was expected to be part of the Whites’ Premier League promotion push this season.

But despite swapping England for Belgium in the summer, Roofe has refused to rule out a return to Leeds in the future.

Speaking about a potential reunion with Leeds in the June edition of FourFourTwo, out now, Roofe said: “If the opportunity was right, I’d never say no.

“It was massively hard to leave. I was settled and all the fans were incredible, but my contract was up and it’s part of football.

“The ideal world would have been getting promoted at Leeds and staying there in the Premier League, but it wasn’t to be. It might still happen for them – it would be amazing.”

Roofe’s goals were crucial in firing Leeds towards the play-offs during Bielsa’s first season at Elland Road last year.

However, the season ended in heartbreak for the Whites has they were beaten 4-3 on aggregate by Derby County in a dramatic play-off semi-final.

Roofe’s goal gave Leeds a 1-0 first-leg advantage in the tie, but the striker missed the return leg through injury.

While the first-leg turned out to be his final game for the club, Roofe admits the feeling of missing on promotion still hurts today.

He added: “I’ve watched the Amazon documentary and it brings back all the memories – the blood, sweat and tears that we put into it, then the bad ending.

Roofe has continued his goalscoring form for Anderlecht this season, scoring six goals in 13 league appearances for Kompany’s side despite a disappointing eighth-placed finish for the club.

Overall, the forward is enjoying his new life in Belgium but injuries and the cancellation of the Belgian top-flight due to coronavirus has made it a stop-start debut campaign abroad.

He said :“It was going quite well for me [before coronavirus]. The injury at the start was very frustrating, and the team were learning the new system and getting used to each other.”

Roofe was also full of praise for new manager Kompany, who also left England last season to become the player-manager at his boyhood club.

On Kompany’s influence at Anderlecht, Roofe said: “Not many people could do his job – he’s player, captain, coach and manager all in one. I don’t know how he has the time and energy to do so much, and at a high standard.

“He leads by example, but isn’t someone who has his own way and that’s it.”

Read the full interview with Kemar Roofe in the June 2020 issue of FourFourTwo magazine, available in shops and online now. Our new magazine looks at the 100 greatest managers in the history of football, exploring the tacticians and tinkermen who have influenced the game more than anyone else, investigates the fall of Barcelona's famed La Masia academy, presents eight pages of quiz questions and football posers to keep you busy during lockdown and discovers the trophy you've never heard of, that Liverpool are proud owners of. We also chat to Bobby Zamora, Shaun Wright-Phillips, Jorginho, Robbie Fowler and more.